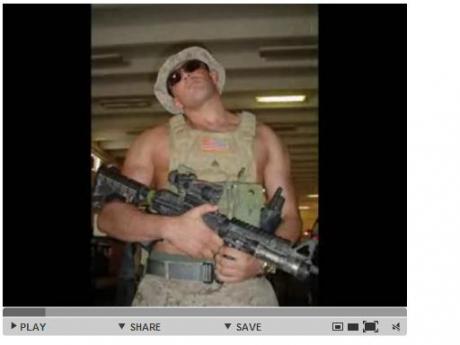 In one video, a US soldier blasts insurgent gunmen with a heavy sniper rifle as the room fills with smoke. In another, members of an Iraqi family throw their arms around soldiers, weeping and rejoicing, after learning that their kidnapped relative h

Sovereign citizens the FBI and the Military want to catch in dragnet are slippery eels.

I will not reveal my identity. I want to keep it as a surprise to PureTrust when we meet on a date. But this is what I want to say: With the Military working with the FBI, my chance of having a date with PureTrust is dwindling to 0.

Panocha, heh, heh, he,e,e. Do I know you? I remember your name. Aren't you one of the four finalists in the 2009 Last Comic Standing? I was in the television Audience. I pressed the button for you. You were the best.

Is PureTrust or Hawkeye included in those 100,000 "sovereign citizens" to be rounded up? Just curious. PureTrust is arranging a date with me. I already spent $210 plus tax for a dress to wear, and I would hate to lose it when he is no longer around.  He may not "dangle" at the end of the rope, but I don't want a date with a convict on parole. Not even if Larken Rose, a convicted tax felon, volunteers to take his place. I am too dignified for that.  Anybody talk to the Military or FBI for PureTrust ... please?

I am excited of this new development. Now the Military is fighting Islamic Militants in cyberspace. You anti-Government people whom the National Institute of Health had scientifically identified as "mentally ill" are using the computer to your advantage. Now you will hate the computer when the Military turns it around – using it to catch you.

Working with the FBI your wide margin of escape is narrowing down to zero. The FBI is now active in warning the public of your presence. You are specifically identified, before they pull the lever with a rope around your neck. You could no longer use your tongue to lash out when it is coming out of your mouth while you dangle at the end of the rope.

10440 recommendations. Sign Up to see what your friends recommend.

(Reuters) - These extremists, sometimes known as "sovereign citizens," believe they can live outside any type of government authority, FBI agents said at a news conference.

The extremists may refuse to pay taxes, defy government environmental regulations and believe the United States went bankrupt by going off the gold standard.

Routine encounters with police can turn violent "at the drop of a hat," said Stuart McArthur, deputy assistant director in the FBI's counterterrorism division.

"We thought it was important to increase the visibility of the threat with state and local law enforcement," he said.

In May 2010, two West Memphis, Arkansas, police officers were shot and killed in an argument that developed after they pulled over a "sovereign citizen" in traffic.

Last year, an extremist in Texas opened fire on a police officer during a traffic stop. The officer was not hit.

Legal convictions of such extremists, mostly for white-collar crimes such as fraud, have increased from 10 in 2009 to 18 each in 2010 and 2011, FBI agents said.

"We are being inundated right now with requests for training from state and local law enforcement on sovereign-related matters," said Casey Carty, an FBI supervisory special agent.

FBI agents said they do not have a tally of people who consider themselves "sovereign citizens."

J.J. MacNab, a former tax and insurance expert who is an analyst covering the sovereign movement, has estimated that it has about 100,000 members.

STRAPPED INTO A SINKING HELICOPTER (with U.S. Marines) - Smarter Every Day 201

UNVACCINATED SOLDIERS WILL BE FIRED --

Can Mass Subjugation Save American Democracy?