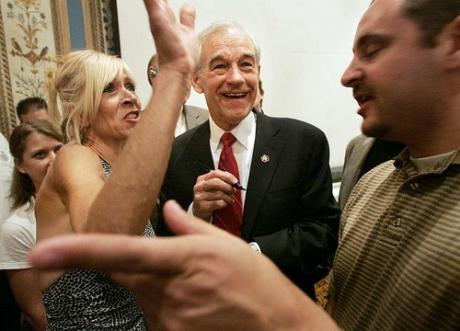 Some say that after eight years of President Bush, the nation would not elect another Texan or another Republican. But Ron Paul shatters both stereotypical definitions, simultaneously bringing him waves of criticism and armies of new fans.

Hey! Harlequin516, you clown! You say Ron Paul failed your limus test for freedom in the areas of abortion, religion, and immigration. I guess this means your freedom includes no right to right to life for infants still in the womb because they might be an inconvenience (like the Nazis found so many "subhumans" to be), and any affirmation of God in the public arena to be anathema, despite the the First Amendment, and since you are opposed to the efforts to define and defend borders, perhaps I should come to your house and help myself to your goods, since you advocate that we all bear the burdens of illegal immigrants who march in our streets demanding we give them what they want...and leave for Europe! Ron Paul is our best hope for restoring freedom in America, short of a violent revolution in the Spirit of 1776.

Ron Paul isn't all that. He's not really about freedom either. He failed my litmus test for freedom in the following areas: Abortion, Religion, and Immigration.

Re: http://www.realclearpolitics.com/articles/2007/08/ron_paul_ideadriven_decent_unw.html
I read your piece of PROPAGANDA that you wrote for realclearpolitics. There is only one thing that REAL CLEAR, you are one of the minions working for the Fascist POLITICAL establishment. That ESTABLISHMENT is very afraid of Ron Paul, because he speaks the truth. He says what most people are beginning to understand, we live under a FASCIST government which works for the Banks and Big Business! Any information which informs the public of what is going on is quickly suppressed by concerted effort which you are PART OF.

Every day Ron Paul continues to run, be in debates, hits on his website, recruits a new members on Meetup, new friends on myspace, he is winning hearts and minds to the philosophy of FREEDOM and LIBERTY. These are the same principles that Our Founding Fathers fought and DIED for! Ron Paul WILL NOT BE DENIED!

Every time Ron Paul speaks he fills halls of enthusiastic supporters, not of school children. If you knew anything, you would know otherwise. Look at what happened to one Ed Failure who tried to deny Ron Paul to attend his "Iowans for Tax Relief" conference. Ron Paul, who has far and away the best record of tax relief wasn't even invited. During the ruckus that ensued, it was reveled that Mr. Failure was a McCain big money supporter and even worked for his campaign how convenient! After many THOUSANDS of attempts by supporters and campaign officials to invite the good congressman Ron Paul, ITR steadfastedly refused to include him. So Ron Paul had his own rally there at the same venue and had over 1200 people show up, more people there than all the rest of the candidates COMBINED! Many supporters flew or drove from many states away, hardly the work of school children.

Take a look at Rick Beltram statement that Ron Paul that he was not welcome in South Carolina. Ron Paul supporters got on the phone, email, and fax and bombarded the GOP office telling them to invite Ron Paul. Rather then have the situation turn into a media circus, they did the smart thing and Invited Ron Paul. Over 1000 people showed up many from other states.

Or Saul Anubis, the GOP boss from Michigan. He tried to circulate a petition to have Ron Paul banned from any future debates. He seemed to be incensed that Ron Paul would dare use the governments own information that OUR POLICY in Iraq lead to September 11th tragedy. In the next few days they got over 20,000 phone calls. They had to shut down the office. They did the smart thing and reversed their decision. None of these incidents could hardly be considered the work of school children.

This doesnâ€™t even consider the fact that Ron Paul has $2.4 million in the bank easily placing him as someone who is very electable. Even without the media censorship which has been prevalent since Ron Paul announced his running for the office of president. School children donâ€™t donate like that. With all the free volunteer work, the meetup groups are performing making signs, buying billboards, creating websites, and plain ole grassroots activism Ron Paul may not even have to spend it! The effort of these devoted supporters is priceless!

Here in this letter I mention 5-7 excellent stories. I know you won't print them because if you do then you will get your hand slapped by your handlers. Several of them make great stories but instead you put the piece of propaganda on your website that would make Joseph Goebbels proud.

Now it does expose a few people to Ron Paul and also gives me a chance to tell you what a worthless piece of garbage you wrote. I expect to see more excrement being spewed forth from other useless propaganda machines such as the one you "write" for in an attempt to convince the public that Ron Paul can't win. I hate to be a bearer of bad news but Ron Paul has already won. He is freeing minds every day and you canâ€™t stop him. It doesnâ€™t even matter that the election is rigged. That because in the future the Ron Paul Revolution will be called the Ron Paul LANDSLIDE!

You just might experience in the next few days what the Ron Paul Revolution is all about. I hope you have a blessed day and may God have mercy on your souls!

Thomas Mario of the family Costanzo