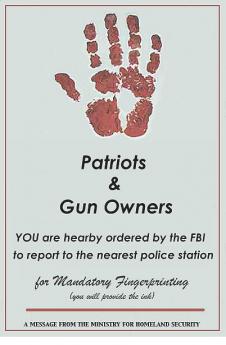 Sens. Diane Feinstein and Mel Martinez authored a bill (with 11 co-sponsors, including Sen. Barack Obama) that was incorporated into a housing bill passed by the Senate Banking Committee that creates a national fingerprint registry.

OBAMA OR McCAIN... IT IS AL THE SAME

READ "WORLDWIDE EVIL AND MISERY" a very unique book and reading it will undoubtedly change the way you look at both history and the world today. A must for everyone who wants to know what the near future will bring.