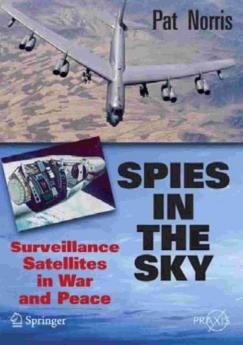 A Bush administration program to expand domestic use of Pentagon spy satellites has aroused new concerns in Congress about possible civil-liberties abuses. On Tuesday, the House Appropriations Committe approved an amendment denying

1 Comments in Response to You're on Candid Camera

What do the current presidents and prime ministers of France, United Kingdom, the Netherlands, India, Georgia, Greece, Colombia, Mexico, Portugal and many other countries have in common? Tomorrow's political leaders and other potential leaders in the media, education, labor relations and other fields are being selected by the U.S. Embassies and educated by our elite through the U.S. State Department. Earlier in their careers all have participated in the Foreign Leader Program. After participating in this special program more then 240 alumni became heads of government in their home countries!

This book is about the development of a New World Order that aims to suppress the whole of humanity.

"There are people that remain behind the scenes of the world stage, and that is why there are two types of history: first the official, forged ad usum Delphini, and second the secret one, in which the real causes of events are written down - a disgraceful history." Honoré de Balzac

After the collapse of European communism and the end of the Cold War there was a moment when many people thought peace had never been closer. That, however, was idle hope. The worldwide crises have not disappeared. The world has never known as many conflicts, refugees and displaced persons before. From refined plots new revolutions, wars, financial crises and political disasters develop. It seems like humanity is kept in a continuous state of agitation, instability and fear.

Fear and depression form part of every day life and everywhere people feel discouraged and down because of social, spiritual, physical and emotional problems. Our society has grown more harsh and ruthless every day. Children are becoming more aggressive and have no respect for adults. Famines (every day more than fifty thousand children die), increasing criminal activities, illegal drug dealing that ruins the lives of millions of people, terrorism, unemployment, climatic changes, corrupt world leaders, continuous non-ending wars and the increase of diseases such as AIDS and Avian influenza (Bird-Flu), all contribute to at least one notion that many people agree on: Mankind needs another world. Many ask themselves: "Where is this world going? Where does this road lead us to? How did we get into this chaos? What else awaits us?" There is no consequence without a cause. What is the reason for our fears? Of course there are a lot of self-centered and heartless people, but they are not the main offenders. The origins of the fear are deeper and clearly lay somewhere else.

We are raised, by tradition, to trust our governments, and convinced that they care about us. This, however, is a big mistake. Below the surface of official politics lies a complicated social and intellectual process that is taking place. The famous Victorian statesman Benjamin Disraeli once alleged: "The world is governed by very different personages from what is imagined by those who are not behind the scenes."

Edward Bernays, a nephew of Sigmund Freud, claimed in his book Propaganda: "We are governed, our minds are molded, our tastes formed, our ideas-suggested, largely by men, that we have never heard of. In almost every act of our daily lives, whether in the sphere of politics or business, in our social conductor or our ethical thinking, we are dominated by the relatively small number of persons."

The German politician Walter Rathenau, a man who was very influential during his life, declared in the Neuen Wiener Presse of Decem­ber 24, 1912: "Approximately three hundred men that know each other and that appoint their successors themselves determine the faith of this world. Their power exists in absolute confidentiality."

R. Buckminster Fuller claimed: "Great nations are simply the operating fronts of behind-the-scenes, vastly ambitious individuals who have become so effectively powerful because of their ability to remain invisible while operating behind the national scenery."

During his 'Campaign Speeches' (1912), Woodrow Wilson said: "We have come to be one of the worst ruled, one of the most completely controlled and dominated Governments in the world - no longer a government of free opinion, no longer a Government by conviction and vote of the majority, but a Government by the opinion and duress of small groups of dominant men."

In similar wording Theodore Roosevelt declared during his 1912 election campaign: "Behind the visible government there is an invisible government upon the throne that owes the people no loyalty and recognizes no responsibility."

During a lecture in the Waldorf-Astoria Hotel in New York on April 27, 1961, John F. Kennedy also spoke of a secret government behind the scenes of world politics. "We are opposed around the world by a monolithic ruthless conspiracy."

Are the visible world leaders just mere puppets directed by an invisible power from behind the scenes? Are there invisible hands controlling the world? Is there a conspiracy? Who are the conspirators?

During a meeting of Nobel Prize winners in Lindau (1978) the renowned Jewish biochemist George Wald, Professor Emeritus at Harvard and co-recipient of the 1967 Nobel Prize for Medicine said the following: "I do not believe that in the West the governments actually rule. According to me it's the accomplices of the huge financial and industrial powers that rule. There are innumerable multinationals that, like global giants, have gathered power and immense wealth. These are not just companies, they are world powers. Do they have military power? Of course they have military power. Can they control and manage power? Of course, they manage our governments."

In an interview Russian General Leonid Ivashov states: "We are dealing with the rise of a new geo-political supranational power on the world scene. This geo-political power consists of the richest families on this planet. Together with the most powerful multinationals they rule and control all countries and all coalitions. The true aim of this elite group is complete control of Planet Earth."[2]

The World Institute for Development Economics also declares that the greatest part of all wealth on earth is in the hands of only a small number of families[3].

The 'Ruling Powers' of which George Wald, Arthur Jensen, Salvador Allende and Leonid Ivashov speak, consist of a small elite group formed by the most influential and powerful, anonymous, very exclusive family dynasties that live dispersed over the world. They keep their power and money betwixt them by intermarriage. They operate behind the scenes of the most important enterprises, media and the financial institutions, but also behind the political scenes. Through connections, money and violence these powerful double-crossing families slipped in with one ultimate goal: the establishment of a One World dictatorship. Their target is to force a New World Order on the whole of mankind[4]. They have bought an enormous part of the world with its economic power and placed it under its control. With the help of their unimaginable financial reserves they currently dispose of a world wide financial control system with which they can control the entire world economy and political system. They determine how the leading politicians of this world have to act.

Over time these influential families have extended the scope of their power over the whole world. Their web reaches all corners of the world. Their tentacles are woven with all facets of human existence. Their influence is unimaginable and it reaches all the leading institutions and organizations in the fields of politics, education, religion, finances and mass media. Science has also been infiltrated by them and is financially dependent on them and thus subject to manipulation (think of the Rockefeller, Carnegie, and Guggenheim foundation).

Almost all people are prepared to renounce their rights. Even that of free thought, if that guarantees their safety and security. For that reason humanity is made soft and is manipulated in such a way through conflict, hate, envy, hardship, hunger and distress that in the end there will be no other way than to surrender to the power of the invisible elite. Most of the problems mentioned above are created deliberately! Colonel Mandell House, President Wilson's right-hand man, writes in his book Intimate Papers: "Create problems on an international level and then offer the solution that best fits the goal that is strived for."[5]

The more confusion, class struggle, discrimination, wars and political tension exist in the world, the faster the day will come that the whole of mankind will accept a World Government that will rule with an iron fist forever. A World Dictatorship in which a computer controlled social order rules and in which the individual will be controlled at all times. This government will be very authoritarian and there will be a kind of World Council that controls all national and regional councils.

In extreme right, revisionist and anti-Semitic circles it is said that some of the ruling families are of Jewish origin and thus they speak of a Jewish conspiracy. Of course this is nonsense. Among the ruling elite one can find Catholics, Protestants, Muslims, Buddhists and many others. The conspirators are those who, independent of race, nationality or political views strive for world domination. The New World Order they are planning will be a World Dictatorship. Conservatives will call it Socialism or Communism. Liberals will call it Fascism. The label makes little difference; it will be the Gulag Archipelago on a worldwide basis.

We are staring at the gates of hell, and most still have their heads in the sand.