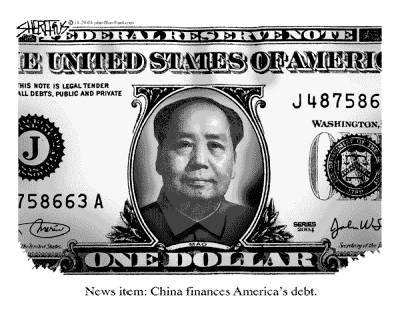 China’s central bank on Monday proposed replacing the US dollar as the international reserve currency with a new global system controlled by the International Monetary Fund. (Federal Reserve... IMF. And the difference is?....)

1 Comments in Response to China calls for new reserve currency

The United States has announced a plan to buy up to $1 trillion worth of toxic assets to help repair banks' balance sheets. And Gordon Brown is busy persuading his EU partners that he really is saving the world by burdening the United Kingdom with the worst public sector deficit in British peacetime history: the Chancellor's forecasts show debt peaking at more than £1 trillion (57.4 per cent of GDP) by 2012-13, and personal debt presently stands at £1.5 trillion.

It is all unsustainable.

But The Spectator has an intriguing story of a possible solution, with further details in The Financial Times, of a proposal from China:

"China's central bank on Monday proposed replacing the US dollar as the international reserve currency with a new global system controlled by the International Monetary Fund."

A global currency would, of course, require a global government...

"The goal would be to create a reserve currency 'that is disconnected from individual nations and is able to remain stable in the long run, thus removing the inherent deficiencies caused by using credit-based national currencies', Zhou Xiaochuan, governor of the People's Bank of China, said in an essay posted in Chinese and English on the central bank's website."

The Spectator says 'this is just the Chinese causing some mischief'.

But Cranmer is not so sure.

They are Communist, after all.

In 1802 Thomas Jefferson observed: "I believe that banking institutions are more dangerous to our liberties than standing armies. If the American people ever allow private banks to control the issue of their currency, first by inflation, then by deflation, the banks and corporations that will grow up around the banks will deprive the people of all property until their children wake-up homeless on the continent their fathers conquered. The issuing power should be taken from the banks and restored to the people, to whom it properly belongs."

And he said more:

"The art and mystery of banks… is established on the principle that 'private debts are a public blessing.' That the evidences of those private debts, called bank notes, become active capital, and aliment the whole commerce, manufactures, and agriculture of the United States. Here are a set of people, for instance, who have bestowed on us the great blessing of running in our debt about two hundred millions of dollars, without our knowing who they are, where they are, or what property they have to pay this debt when called on; nay, who have made us so sensible of the blessings of letting them run in our debt, that we have exempted them by law from the repayment of these debts beyond a give proportion (generally estimated at one-third). And to fill up the measure of blessing, instead of paying, they receive an interest on what they owe from those to whom they owe; for all the notes, or evidences of what they owe, which we see in circulation, have been lent to somebody on an interest which is levied again on us through the medium of commerce. And they are so ready still to deal out their liberalities to us, that they are now willing to let themselves run in our debt ninety millions more, on our paying them the same premium of six or eight per cent interest, and on the same legal exemption from the repayment of more than thirty millions of the debt, when it shall be called for."

Cranmer exhorts his readers and communicants to mediate upon the wisdom of this greatest of presidents, for he is talking of those people who bestow upon us the great blessing of trillions of dollars worth of debt, without our knowing who these people are, where they are, precisely what is owed, or what property they have the right to seize in order to pay off this debt when it is called in.

Cranmer, Archbishop of Canterbury speaks to us from the 16th century through the miracle of the internet. Google His Grace.

Why China's economy is worse than you think (the three "Ds")