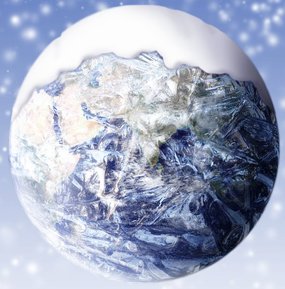 This headline may come as a bit of a surprise, so too might that fact that the warmest year recorded globally was not in 2008 or 2007, but in 1998.

But it is true. For the last 11 years we have not observed any increase in global temperatures.

And our climate models did not forecast it, even though man-made carbon dioxide, the gas thought to be responsible for warming our planet, has continued to rise.

So what on Earth is going on?

Climate change sceptics, who passionately and consistently argue that man's influence on our climate is overstated, say they saw it coming.

They argue that there are natural cycles, over which we have no control, that dictate how warm the planet is. But what is the evidence for this?

During the last few decades of the 20th Century, our planet did warm quickly.

Sceptics argue that the warming we observed was down to the energy from the Sun increasing. After all 98% of the Earth's warmth comes from the Sun.

But research conducted two years ago, and published by the Royal Society, seemed to rule out solar influences.

The scientists' main approach was simple: to look at solar output and cosmic ray intensity over the last 30-40 years, and compare those trends with the graph for global average surface temperature.

And the results were clear. "Warming in the last 20 to 40 years can't have been caused by solar activity," said Dr Piers Forster from Leeds University, a leading contributor to this year's Intergovernmental Panel on Climate Change (IPCC).

He claims that solar charged particles impact us far more than is currently accepted, so much so he says that they are almost entirely responsible for what happens to global temperatures.

He is so excited by what he has discovered that he plans to tell the international scientific community at a conference in London at the end of the month.

If proved correct, this could revolutionise the whole subject.

What is really interesting at the moment is what is happening to our oceans. They are the Earth's great heat stores.

According to research conducted by Professor Don Easterbrook from Western Washington University last November, the oceans and global temperatures are correlated.

The oceans, he says, have a cycle in which they warm and cool cyclically. The most important one is the Pacific decadal oscillation (PDO).

For much of the 1980s and 1990s, it was in a positive cycle, that means warmer than average. And observations have revealed that global temperatures were warm too.

But in the last few years it has been losing its warmth and has recently started to cool down.

These cycles in the past have lasted for nearly 30 years.

So could global temperatures follow? The global cooling from 1945 to 1977 coincided with one of these cold Pacific cycles.

Professor Easterbrook says: "The PDO cool mode has replaced the warm mode in the Pacific Ocean, virtually assuring us of about 30 years of global cooling."

So what does it all mean? Climate change sceptics argue that this is evidence that they have been right all along.

They say there are so many other natural causes for warming and cooling, that even if man is warming the planet, it is a small part compared with nature.

But those scientists who are equally passionate about man's influence on global warming argue that their science is solid.

The UK Met Office's Hadley Centre, responsible for future climate predictions, says it incorporates solar variation and ocean cycles into its climate models, and that they are nothing new.

In fact, the centre says they are just two of the whole host of known factors that influence global temperatures - all of which are accounted for by its models.

In addition, say Met Office scientists, temperatures have never increased in a straight line, and there will always be periods of slower warming, or even temporary cooling.

What is crucial, they say, is the long-term trend in global temperatures. And that, according to the Met office data, is clearly up.

To confuse the issue even further, last month Mojib Latif, a member of the IPCC (Intergovernmental Panel on Climate Change) says that we may indeed be in a period of cooling worldwide temperatures that could last another 10-20 years.

The UK Met Office says that warming is set to resume

Professor Latif is based at the Leibniz Institute of Marine Sciences at Kiel University in Germany and is one of the world's top climate modellers.

But he makes it clear that he has not become a sceptic; he believes that this cooling will be temporary, before the overwhelming force of man-made global warming reasserts itself.

So what can we expect in the next few years?

Both sides have very different forecasts. The Met Office says that warming is set to resume quickly and strongly.

Sceptics disagree. They insist it is unlikely that temperatures will reach the dizzy heights of 1998 until 2030 at the earliest. It is possible, they say, that because of ocean and solar cycles a period of global cooling is more likely.

One thing is for sure. It seems the debate about what is causing global warming is far from over. Indeed some would say it is hotting up.

4 Comments in Response to What happened to global warming?

I've always taken a great interest in the debate since I was told by Native American elders that it was their observations that they were seeing ice melting where at no point in their previously recorded history had this been seen.

However, a great deal of mistrust occurs as the issue becomes politicized. It is simply outright fabrication that there is no credible disputing party or body to the "evidence".

With this as a foundation, it's a recipe for stalemate. But that's nothing I'm going to stop. This is not an honest debate.

"If these writers feel competent to write on the subject they should certainly be aware of the “Global Warming Petition Project” where over 31,000 American scientists including 9,000 PhDs have gone on record as opposing the shoddy science that is the feeble spine of the climate alarmist movement. And if they wanted to authenticate the claims of the politicized science on which they are reporting, they might have spent a few minutes on one of the many non-political websites such as scienceandpublicpolicy.org where they would have learned (1) while the IPCC predicts warming between 2.4 and 5.3 degrees Celsius per century, the observed trend over the last 8 years is 1.0 oC per century in the opposite (i.e.,cooling) direction.  And the oceans—where 80 percent of the heat was to end up—have been cooling also based on 5+ years of data since the deployment of 3,300 automated bathythermograph buoys throughout the world’s oceans."

Articles like this, by people probably paid to disclaim global warming, do not help us or the planet.  It is a lie that temperatures are not going up.  A good deal of the glaciers are melting and sea levels are rising, as is ocean temperature--in certain areas.  Global warming produces ERRATIC weather, not necessarily a steady increase in hot weather.  For those out there too ignorant or lazy to understand what global warming is, then industry lies and talking points get believed and repeated without challenge.

He Sued Chevron and Won. Now He's Under House Arrest.