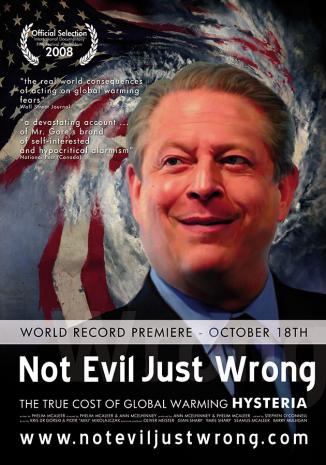 Just a few months ago leftwing pundits were writing the obituary of modern conservatism.

That was before a momentous summer of Tea Party protests and town hall insurgency. Before one million friends of liberty took to the streets of the nation's capital on September 12 shouting “NO” to government control of the nation's health care; “NO” to nanny state socialism; and “NO” to an unending spiral of taxes, spending and debt.

The left has overreached; grossly misreading the results of the last election as a mandate to radically change America.

And nowhere is this overreach more evident than the blind allegiance to Al Gore's agenda of environmental extremism. The conversion of global warming hysteria into actual public policy is already having huge impacts on American families. On the price we must pay to drive our cars and heat and light our homes and businesses. On jobs and the very standard of living we Americans take for granted.

Now, like a sleeping giant, the love of freedom and limited government is rising again from the American heartland. More and more Americans are joining the increasing number of scientists across the planet skeptical of Gore's doomsday predictions.

After the revolt against government health care, how do conservatives continue the momentum against the radical agenda of the left?

Exposing the fraud that is Impossible Foods

Satellite operator Viasat is calling for a stop to all SpaceX Starlink launches...

No News: G7 says it will stop doing what it's mostly not doing: China will keep financing...