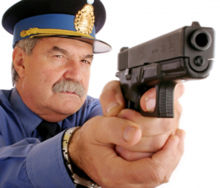 Williamson, 29, insisted he did nothing wrong and that any exposure of his private parts were accidental.

"Yes I wasn't wearing any clothes but I was alone, in my own home and just got out of bed. It was dark and I had no idea anyone was outside looking in at me," he said.

Williamson, who has a five-year-old daughter, added: "I am a loving dad. Any of my friends and anyone knows that and there is not a chance on this planet I would ever, ever, ever do anything like that to a kid.

"I never had a conversation with anyone, never saw anyone. Didn't cross my mind, came and got coffee. I mean if I stood and seemed comfortable in my kitchen possibly it's natural. It's my kitchen," he insisted.

A spokesman for Fairfax county police, Mary Ann Jennings, said Williamson was arrested because officers believed he wanted to be seen naked by the public.

The 29-year-old faces up to a year in jail and a $2,000 fine if he is convicted. He is fighting the charge and seeking damages from police.

This happened in *America?* The land of the *free?* Where one's home is one's castle?

what did the elephant say to the naked man?

How do you breathe?

"So Billy, ever seen a grown man naked?"