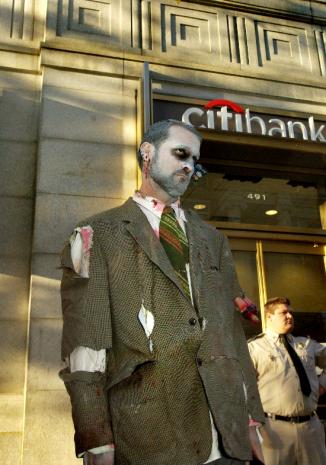 Yet another bank with more than 40% loss taken by the FDIC:

Again, we see that the FDIC refused to step in and close this institution when the firm's Tier Capital Ratio (based on an actual market value for assets) went below 6%, 5%, 4%, 3%, 2%, 1% and flat.

Indeed, the FDIC not only allowed all of the firm's Tier Capital (that is, their EXCESS CAPITAL) to be wiped out, but then allowed the bank to continue to operate until it's asset base was destroyed to the tune of 43% of "face value" before stepping in and closing the institution.

Prompt Corrective Action - a LAW, not a suggestion - is supposed to prevent this outcome.  It is being wantonly and willfully ignored by the OTS, OCC, The FDIC and CONGRESS.

This level of loss is unconscionable and Sheila Bair, along with everyone involved in bank regulation at The Fed and the various Treasury departments (OTS, OCC and FDIC) must be held to account for their willful and intentional blindness.

"Mark to Myth" is not just a myth, it is a willful and intentional lie.

What is the actual value of assets in our nation's banks - including the really big ones like Bank of America, Citibank, JP Morgan and Wells Fargo?

How can anyone possibly believe, given the overwhelming history of the last two years in this crisis, that the nation's banks are claiming and carrying their assets atanything close to their actual value when we continue to see, week after week, losses to the deposit insurance fund proving that close to half of the claimed "asset value" in these seized banks is a pure, unadulterated fiction?
Related
Sheila Bair Addresses A Worried Nation

As you watch the bobbing metronome of Sheila C. Bair's head during this video ("...but as I said [left tick] we have the ability to immediately access [right tock] up to $500 billion from our Treasury line [left tick]...") wonder to yourself quietly:

How is the FDIC going to slurp down another $500 billion without some roof rasing action on the debt ceiling? How can ANYONE promise that no insured depositor will ever (until the heat death of the universe) lose a dime? What family of narcotic sedatives are being used in this video?

Meanwhile, if anyone is spreading evil rumors about the FDIC, make sure to email flag@fdic.gov immediately.

Try not to get motion sick and vomit.  Also, try not to vomit.
http://www.zerohedge.com/article/shelia-bair-addresses-worried-nation