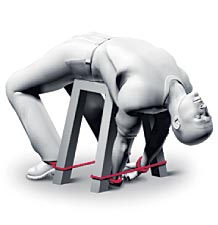 The couple, Daniel Weston and Mary Ann Parmelee, and three other people are accused of luring their two victims to an office where the men were tied up, held for hours and beaten, a spokeswoman for the Los Angeles County district attorney said.

Police were called after one of the victims managed to escape, said the spokeswoman, Shiara Davila-Morales. The incident occurred on Wednesday in the town of Glendale, just north of Los Angeles.

Weston, Parmelee and the three other defendants each were charged with two counts of torture, two counts of false imprisonment by violence and two counts of second-degree robbery, according to a criminal complaint filed against them.

Weston, 52, and Parmelee, 51, both arrested last week and jailed on $1 million bond, shared a house in the suburb of La Canada-Flintridge that is in foreclosure, authorities said.

The article doesn't mention whether leather outfits, chains and whips were used in the alleged torture.  The use of such tools, my friends, would make all the difference!