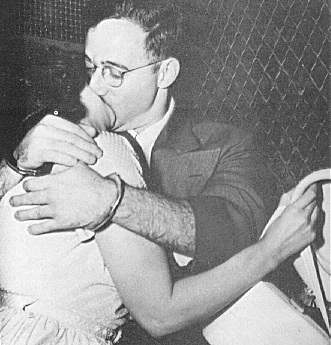 The executions of Julius and Ethel Rosenberg in 1953 have gotten a fresh look in the past two years. An association of historians and journalists have unearthed the long-secret grand jury transcripts from the Rosenberg case after years of litigation. Their findings have been released by trickles on a website and in a few short news articles in America’s daily papers.

Most living Americans probably don’t know much about the Rosenberg case. Perhaps all they know is that it was a case of a man and wife accused of spying or leaking some of America’s atomic secrets to the Soviet Union during the Cold War. Most who know that much are probably aware that there has been controversy surrounding the case for decades. Since the 1950s, opinions about the Rosenberg executions have tracked closely with peoples’ political views. Those on the Left have long thought the Rosenberg prosecution represented bare-knuckled McCarthyesque hysteria, while those on the right have generally viewed the Rosenberg case to have been a soundly proven case of espionage.

The recent grand jury revelations provide fodder for both positions. On the one hand, they shatter all doubts about whether Julius Rosenberg was a Communist spy. He was. His own sons, Michael and Robert Meeropol, who have long been champions of their parents’ exonerations, have partially recanted and resigned themselves to the reality that at least their father really was a committed Communist spy in common cause with the Soviet Union. It is now undeniable that Julius Rosenberg and Martin Sobell forwarded certain military information to the Soviets (although not the atomic secrets that allowed Russia to produce atomic bombs – those secrets were transmitted by high-ranking U.S. government officials, including the Assistant Secretary of the Treasury). On the other hand, the transcripts reveal that Ethel Rosenberg was almost certainly innocent of the crimes she was executed for committing. It appears that Ethel’s conviction was the result of perjured testimony by two government witnesses – her brother- and sister-in-law, David and Ruth Greenglass – who both testified at trial that Ethel Rosenberg had typed up notes regarding U.S. military systems provided by David Greenglass from the U.S. National Laboratory at Las Alamos. In her recently unearthed 1950 grand jury testimony, Ruth Greenglass admitted it was she (Greenglass) – and not Ethel Rosenberg – who transcribed the notes, and in handwritten form.

The differing versions of events described in the 1950 grand jury hearings (which were secret) and the 1951 trial proceedings cannot be reconciled. Ruth Greenglass changed her story between the grand jury hearings and the trial so as to falsely implicate Ethel Rosenberg. We know from several accounts that lawyers for the Justice Department coerced, threatened and coached the witnesses for days before the Rosenberg trial. The government’s star witness, Harry Gold, had been prepped by four hundred hours of coaching by prosecutors and FBI agents. The Feds apparently charged Ethel solely to coerce Julius into confessing – which he refused to do. Prosecutors then fabricated the story that Ethel had typed up some atomic secrets from notes provided by David Greenglass in order to bolster their otherwise shoddy case against her. The prosecutor said in closing arguments that Ethel "sat at that typewriter and struck the keys, blow by blow, against her country" – the words that are most remembered from the trial.

Lost in the discussion of the transcripts has been their astounding revelations regarding the grand jury process itself. How could it take 50 years to reveal these government lies? How could the government conceal for half a century evidence that material testimony in one of the most closely watched trials of the twentieth century was perjured? The grand jury revelations highlight the fact that the grand jury process in the United States – especially at the federal level – has been hijacked by the government.

Ironically, the recent release of the Rosenberg grand jury transcripts is a major break from contemporary practice. It is highly unusual for federal courts to order federal grand jury transcripts to be made public – especially after cases are closed. Federal courts have even punished a reporter for airing the names of witnesses who testified three decades earlier in Jim Garrison's grand jury investigation of President Kennedy's assassination.

The grand jury is an ancient common law institution whose original purpose was to protect people from the prosecutorial power of the government. Under the Fifth Amendment, the Constitution’s Framers intended that no criminal charges could ever be initiated by the government alone. A citizen panel of 23 people (more or less) was supposed to act as an obstacle to prosecutors and ensure that any prosecution be preapproved by common people. Yet today most commentators agree that the government can get any grand jury to "indict a ham sandwich." Federal "indictment rates" greater than 99 percent have been reported in some years. In 2001, federal grand juries declined to indict in only 21 cases nationwide. "These numbers suggest that, whatever the reason, the federal grand jury now exercises very little power as a shield between the government and its citizens."

The story of how this once-proud institution fell under the control of the very prosecutors it was supposed to control is a long and tragic one. During the nineteenth century, all three branches of government joined together to silence and deaden the institution. Over time, it became common for government prosecutors to be present in grand jury hearings (a practice strictly forbidden at the time of the Founding), and eventually prosecutors became managers of the proceedings. In 1946, all three branches approved the Federal Rules of Criminal Procedure, which purported to codify for the first time the common law rules that govern criminal procedure at the federal level. The rules pertaining to grand jury practice, however, were deliberately altered to evade the plain language of the Fifth Amendment ("No person shall be held to answer for a capital, or otherwise infamous crime, unless on a presentment or indictment of a Grand Jury").

A presentment is an independent statement of a grand jury not necessarily approved by a prosecutor. For centuries before the enactment of the Federal Rules of Criminal Procedure, grand juries would issue presentments exposing government misconduct or accusing people of crimes known to the grand jurors themselves. Occasionally, grand juries issued presentments that openly proclaimed a person’s innocence in defiance of the government’s allegations. The government rule-makers in 1946 deliberately and calculatingly eliminated the possibility of a federal grand juries issuing non-government-approved statements or conclusions of any kind. Since 1946, any publicized presentments by federal grand jurors have been prohibited as violations of grand jury "secrecy" rules. Indeed, grand jurors that release statements of any kind are now subject to possible five-year prison sentences.
[. . .]

Supreme Court Declines To Hear Appeal From Florist Who Refused Service Over Same-Sex...

At Least 5 Justices Seem To Think the CDC's Eviction Moratorium Is Illegal.