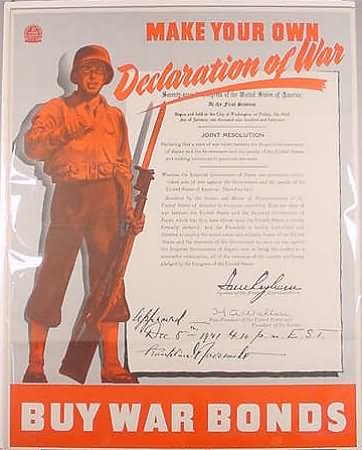 (Publisher: Declare War against which one?)

ACHIN, Afghanistan — American and Afghan officials have begun helping a number of anti-Taliban militias that have independently taken up arms against insurgents in several parts of Afghanistan, prompting hopes of a large-scale tribal rebellion against the Taliban.
Skip to next paragraph
Enlarge This Image

Leaders of anti-Taliban militias in Kunduz Province met with the Afghan government's intelligence chief in Kunduz this month.

Members of the Afghan National Police, above, passed an abandoned Russian Army vehicle on a patrol near a village in Kunduz Province.

The emergence of the militias, which took some leaders in Kabul by surprise, has so encouraged the American and Afghan officials that they are planning to spur the growth of similar armed groups across the Taliban heartland in the southern and eastern parts of the country.

The American and Afghan officials say they are hoping the plan, called the Community Defense Initiative, will bring together thousands of gunmen to protect their neighborhoods from Taliban insurgents. Already there are hundreds of Afghans who are acting on their own against the Taliban, officials say.

The endeavor represents one of the most ambitious — and one of the riskiest — plans for regaining the initiative against the Taliban, who are fighting more vigorously than at any time since 2001.

By harnessing the militias, American and Afghan officials hope to rapidly increase the number of Afghans fighting the Taliban. That could supplement the American and Afghan forces already here, and whatever number of American troops President Obama might decide to send. The militias could also help fill the gap while the Afghan Army and police forces train and grow — a project that could take years to bear fruit.

1 Comments in Response to As Afghans Resist Taliban, U.S. Spurs Rise of Militias

This is great!  ROFL!  For some unknown and ungodly reason (known to some of us as The Pipeline), the US invades Afghanistan.  It causes chaos and mayhem, kills innocent civilians right and left and destroys whatever little was left by the Russians.  Then, it starts to syphoon money to the Taliban (yeah, the very same force they're supposed to be fighting), now they're syphooning more money (read as tax dollars) to the anti-Taliban militians.  Gotta love the stupidity and the irony!  Pretty soon, they'll also be financing the anti-Taliban anti-militians and so on and so forth.  Unbelievable!