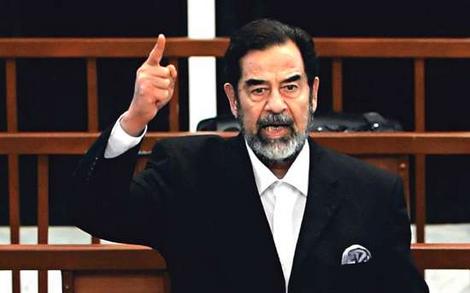 BAGHDAD – Turning on their TVs during the long holiday weekend, Iraqis were greeted by a familiar if unexpected face from their brutal past: Saddam Hussein.

The late Iraqi dictator is lauded on a mysterious satellite channel that began broadcasting on the Islamic calendar's anniversary of his 2006 execution.

No one seems to know who is bankrolling the so-called Saddam Channel, although the Iraqi government suspects it's Baathists whose political party Saddam once led. The Associated Press tracked down a man in Damascus, Syria named Mohammed Jarboua, who claimed to be its chairman.

The Saddam channel, he said, "didn't receive a penny from the Baathists" and is for Iraqis and other Arabs who "long for his rule."

Jarboua has clearly made considerable efforts to hide where it's aired from and refuses to say who is funding it besides "people who love us."

Iraqis surprised to find Saddam on their TVs responded with the kind of divided emotions that marked his reign.

"Iraqis don't need such a satellite channel because it has hostile intentions," said Hassan Subhi, a 28-year-old Shiite who owns an Internet cafe in eastern Baghdad.

Others said they felt a nostalgic sorrow at the sight of their late leader, a Sunni Arab.

"All my family felt sad," said Samar Majid, a Sunni high school teacher in western Baghdad, mentioning images shown from Saddam's execution, and pictures of his two sons and grandson.

The channel, which is broadcast across the Arab world, dredges up the sectarian divisions that Saddam inspired among Shiites and Sunnis at a time when Iraq is gearing up for crucial national elections. Iraqi politicians have been arguing over parliamentary seat distribution in a dispute that has inflamed the splits. The wrangling will likely delay the vote beyond its constitutionally required Jan. 30 deadline.

Saddam's hanging three years ago was on the first day of Eid al-Adha, the most important holiday of the Islamic calendar. His execution — and the day it was done — remains a sore point for Saddam sympathizers still smarting over images of the defiant leader in his final moments as Shiites in the death chamber shouted curses.

The Saddam Channel debuted on Friday, the first day of this year's Eid for Sunnis. The holiday started Saturday for Shiites. The station's official name alternates between "Al-Lafeta" ("the banner") and "Al-Arabi" ("the Arab").

Oyate, two years ago I told Ernie that the end of the Ron Paul R3volution would be marked by severe declines in the bedsheet and spray paint industries.

The Saddam Channel. Do you get the feeling somebody is getting the last laugh here? Welcome to the age of electronic martyrdom.

I wonder how advertisers will respond. I got a warehouse full of sheets and towels that aren't selling in the USA.

NSA Vs. Tucker Carlson: Are We A Banana Republic?