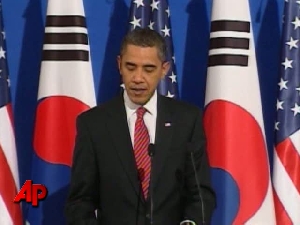 In 2004, the International Atomic Energy Agency (IAEA) revealed that a member state had violated its Safeguards Agreement by carrying out covert uranium conversion and enrichment activities and plutonium experiments for more than two decades. The nature of certain of those enrichment activities, moreover, raised legitimate suspicions of interest in a nuclear weapons program.

The state was found to have lied to the IAEA even when it began investigating these suspicious activities, claiming that its laser enrichment research did not involve any use of nuclear material.

There was just one major difference between the South Korean and Iranian cases: Iran never enriched uranium at a level that could only represent an interest in nuclear weapons, but South Korea did.

Yet the IAEA treated Iran as a state to be investigated indefinitely, after failing to give South Korea even a slap on the wrist.

Even more remarkable is the fact that the two cases were the subject of IAEA reports issued within the same week in November 2004.

1 Comments in Response to IAEA Applying a Nuclear Double-Standard

No, I totally beg to differ.  If you really wanna see a nuclear double-standard, ask yourself why the IAEA is not investigating Israel, a rogue nation that owns more than 22 nukes, enough to wipe out the Middle East and the United States right after that.  Now, that's what I call double standard!  So, before you go on to print shit like this, you may do yourself (and the rest of us) a big favor by getting your bearings straight and doing a tad of research.

The Tiananmen Square Massacre: From China's Authoritarian Roots to the Iconic "Tank Man

A Critical Shift In The War For Oil

The US Isn't An Israel Puppet, Israel Isn't A US Puppet: It's One Empire

Who Elected America To Rule the World?

US And Its Allies Try To Split The World In Two