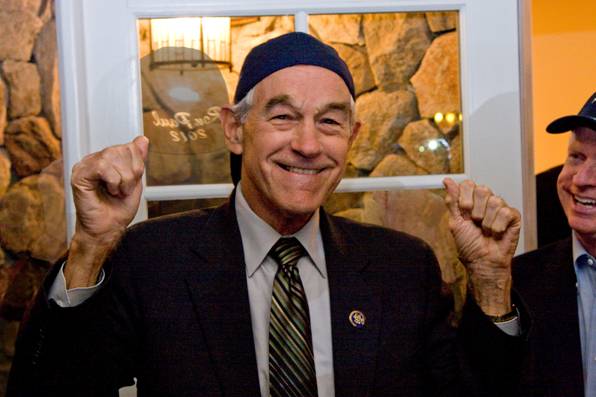 Ron Paul's ideas no longer fringe With the economy still struggling, the lawmaker's libertarian views are getting serious attention.

For three decades, Texas congressman and former presidential candidate Ron Paul's extreme brand of libertarian economics consigned him to the far fringes even among conservatives. Not a few times, his views put him on the losing end of 434-1 votes on Capitol Hill.

No longer. With the economy still struggling and political divisions deepening, Paul's ideas not only are gaining a wider audience but also are helping to shape a potentially historic battle over economic policy -- a struggle that will affect everything including jobs, growth and the nation's place in the global economy.

Already, Paul's long-derided proposal to give Congress supervisory power over the traditionally independent Federal Reserve appears to be on its way to becoming law.

His warnings on deficits and inflation are now Republican mantras.

And with this year's congressional election campaign looming, the Texas congressman's deep-seated distrust of activist government has helped fuel protests such as the tea-party movement, harden partisan divisions in Washington and stoke public fears about federal spending and the deficit.

"People are wondering what went wrong. And they're not happy with what the government is offering up," said James Grant, editor of Grant's Interest Rate Observer, offering an explanation for why seemingly wonkish arguments over interest rate policy and the money supply are spilling over onto ordinary Americans.

Some of Paul's most extreme views are still beyond the pale for most economists. Despite the eroding value of the dollar, no one expects the U.S. to return to the gold standard, as Paul advocates; most economists think that could wreck the economy.

In their less drastic forms, however, Paul's ideas are being welcomed by conservatives and viewed with foreboding by liberals. For conservatives, runaway inflation constitutes the biggest potential threat to the nation's future. Liberals worry that cutting back stimulus efforts too soon could slow or even halt the current recovery.

The debate over that question -- what the basic thrust of U.S. economic policy should be -- is likely to dominate the coming elections and Washington policymaking.

And so far, Paul and his fellow conservatives are on the offensive. President Obama and congressional Democrats are repeatedly pledging not to increase the deficit and to begin cutting back soon.

1 Comments in Response to Ron Paul's Ideas No Longer Fringe

Extreme brand of libertarianism you say?  Oh, the horrors that one must endure!