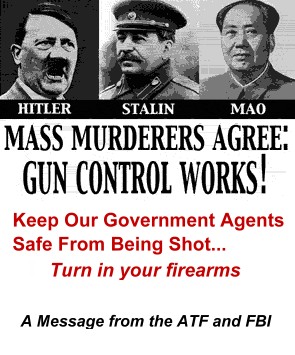 Groves' wife, Rebecca Besherse, said she will petition to get the guns - a Remington .22-caliber long rifle and an Accu-Tek .380 handgun - returned to her. She'd like to sell them, now that her husband will be in prison and not at work. But she's not getting her hopes up.

She said she harbors no ill will toward the jury and wasn't surprised by the verdict.

"They did exactly what they were told to do," she said.

But she still can't understand her husband is in jail because of guns she owned before they even met.

"I did not become a felon by marrying him," she said.

She'll soon head to the local Department of Social and Health Services office to apply for benefits on behalf of their 4-year-old daughter, Sophim. As a child of an incarcerated parent, the state will pay for housing, Besherse believes.

"They did exactly what they were told to do.."

And therin lies a large part of the problem.


I remember lawyer and felon G. Gordon Liddy discussing his wife's vast gun collection in their home on his radio show, in which he essentially dared the government to do something about it.  What, didn't his wife have the Right to own guns under the same roof that he resided in?  Didn't his wife have the Right to possess a firearm for self defense in her own home?  Did her Rights disappear because her husband is a felon?

The Defensive Firearm: An Absolute Necessity

Could The US Ban Guns? Australia Tried Something Pretty Close

Charles Newton: The Forgotten History of the Wildcatter Who Created the .22