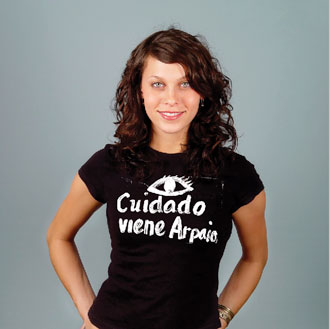 PHOENIX (AP) — An advocate for immigrant and civil rights has started using text messages to warn residents about crime sweeps by a high-profile Arizona sheriff.

Lydia Guzman, director of the nonprofit immigrant advocacy group Respect/Respeto, is the trunk of a sophisticated texting tree designed to alert thousands of people within minutes to the details of the sweeps, which critics contend are an excuse to round up illegal immigrants.

Guzman said the messages are part of an effort to protect Latinos and others from becoming victims of racial profiling by sheriff's deputies. Deputies have been accused of stopping Hispanics, including citizens and legal immigrants, for minor traffic violations to check their immigration status.

"Everyone is responsible for sending it out to their own networks, and that is how it spreads like wildfire," Guzman said of the text messages.

Maricopa County Sheriff Joe Arpaio has repeatedly said his deputies do not engage in racial profiling, and he publicizes the details of his crime sweeps ahead of time. He said he suspects the real goal of the text messages is to help illegal immigrants avoid arrest.

"This little group of people is (in favor of) open borders, and they don't like what I am doing. That is the bottom line," Arpaio said. "But it isn't interfering with our operations because every time we do it, we still arrest a good number of people, including illegal aliens."

Arpaio has conducted 13 sweeps since March 2008, and deputies have arrested 669 people, about half of whom were held on immigration violations.

The sheriff said his opponents are walking a line between exercising free speech and breaking the law by helping immigration violators avoid detection. He said the texts are possibly even tipping off human-smuggling organizations.

Guzman said she sends the messages to a wide range of groups, including the American Civil Liberties Union of Arizona, Copwatch and various immigrant-rights groups such as Somos America and Puente. She concedes that some who receive the text messages likely use the information to avoid being caught and deported.

Andy Hessick, a constitutional law professor at Arizona State University, said sending warnings to people who might be subject to racial profiling would likely be considered free speech. But sending messages with the specific intent of warning illegal immigrants to help them avoid arrest could be akin to being an accomplice after a crime.

David Hudson Jr., a First Amendment scholar at the First Amendment Center at Vanderbilt University, said the messages are protected free speech because they are merely letting people know what Arpaio is doing, similar to publicizing DUI checkpoints and speed traps or flashing your headlights when police are nearby.

"That is not unlawful," he said. "It's the conveyance of truthful information."

Information from: The Arizona Republic.