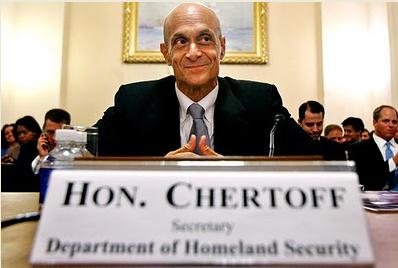 The Washington Post reports today, on page A7, that Michael Chertoff, the former DHS secretary, has been playing a little fast and loose with the public trust.

Since the attempted bombing of a U.S. airliner on Christmas Day, former Homeland Security secretary Michael Chertoff has given dozens of media interviews touting the need for the federal government to buy more full-body scanners for airports.

What he has made little mention of is that the Chertoff Group, his security consulting agency, includes a client that manufactures the machines. The relationship drew attention after Chertoff disclosed it on a CNN program Wednesday, in response to a question.

An airport passengers' rights group on Thursday criticized Chertoff, who left office less than a year ago, for using his former government credentials to advocate for a product that benefits his clients.

"Mr. Chertoff should not be allowed to abuse the trust the public has placed in him as a former public servant to privately gain from the sale of full-body scanners under the pretense that the scanners would have detected this particular type of explosive," said Kate Hanni, founder of FlyersRights.org, which opposes the use of the scanners.

This seems like reasonable criticism. Chertoff has been all over the media, presenting himself as a credible expert on security matters -- he was, after all, the head of the Department of Homeland Security -- and talking up this technology. As the Post's article makes clear, Chertoff has a conflict of interest, which has been largely ignored.

And yet, in the same newspaper, on the same day, in the same section, none other than Michael Chertoff has a 736-word op-ed calling for the expansion of whole-body-imaging technology at airports, and dismissing skeptics as "privacy ideologues."

Is it me, or is there a disconnect between pages A15 and A7 the Post?

Steve Benen is "blogger in chief" of the popular Washington Monthly online blog, Political Animal. His background includes publishing The Carpetbagger Report, and writing for a variety of publications, including Talking Points Memo, The American Prospect, the Huffington Post, and The Guardian. He has also appeared on NPR's "Talk of the Nation," MSNBC's "Rachel Maddow Show," Air America Radio's "Sam Seder Show," and XM Radio's "POTUS '08."

1 Comments in Response to Michael Chertoff's Pushing "Full-Body Scanners", Has a Conflict of Interest... $$$$$$$

A conflict of interest?  Is that a term even used today?  Is anyone in Washington familiar with it?

Homeland Security Ignoring Congressional Requests For Info On Where Illegal Immigrants Are Being..