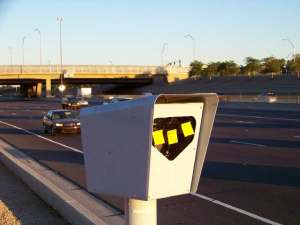 PHOENIX (AP) — The company that runs speed cameras on Arizona's highways is behind a petition designed to change the way violators are served with tickets so more of them get paid, The Associated Press has learned.

The petition, filed with the Arizona Supreme Court on Jan. 8, does not mention the company — Scottsdale-based Redflex — or Quarles & Brady, the law firm Redflex paid to write the document. It only mentions John Wintersteen, a retired police chief for Paradise Valley, as the petitioner and is written under his name in the first person.

In response to a telephone call inquiring about the petition, Wintersteen told the AP that he supported changing a rule so violators could be served through first-class mail rather than in person, so he agreed to work with Redflex on the document.

Redflex officials and a spokeswoman for Quarles & Brady did not immediately return phone calls on Friday seeking comment.

Wintersteen said he was invited to a lunch with employees of Redflex and its biggest competitor, Scottsdale-based American Traffic Solutions, in late December. He said he mostly talked with them about public education and the photo-enforcement program. He said he has long been friends with many people at both companies, whom he met during his 13 years as police chief in Paradise Valley, a wealthy suburb of Phoenix.

At the end of the lunch, Wintersteen said Redflex employee Cristine Weekes handed him the petition, which had blank spaces for the name, address and phone number of the petitioner.

"She said, 'Take a look at this. What do you think?'" Wintersteen said. "I looked at it that evening and in the morning said, 'Yeah I'd be really interested in doing this.'"

Wintersteen said he then looked over a couple drafts of the petition with Quarles & Brady, and asked them to make a few minor changes before he signed it. He said he offered to file it himself, but the firm did it.

Wintersteen said he isn't getting any money for his efforts. He said he simply believes photo-enforcement cameras save lives.

"I'm doing it because as a retiree, I'm now free to speak up more about these things and free to put energy and time into things that are going to make the community safer," he said.

The Arizona Department of Public Safety introduced the cameras in September 2008 and slowly added more until all 76 were up and running by January 2009. Supporters said the cameras slow down drivers, reduce accidents, and free up law-enforcement officers for serious criminals, while opponents argue that they are intrusive and are more about making money than safety.

The mobile and fixed cameras snap the photos of speeders going 11 mph or over the speed limit, and violators get tickets in the mail. The current rule requires people to be served in person with a ticket if they don't pay. The proposed change would allow violators to be considered served by mail.

Gov. Jan Brewer said Friday she wants to let the state's contract for the cameras expire later this year and have the program go away, unless voters authorize it. Brewer budget director John Arnold said Friday that the governor's position on the program is that "she doesn't like it."

Make copies of the ticket sent to you. Return it Registered mail to whatever enforcement agency or court address is listed on the ticket. along with a note that says:

The enclosure herein contains the aforementioned and misdirected documents; as there is not enough knowledge or information disclosed to form a responsive answer, said documents are being returned forthwith."

Once the paperwork has been returned, you have not been served. (Of course, some Attorneys will warn you that there might be some hassles with law enforcement if you do this.)

ATS is currently suing Redflex for getting the state contract.

ATS and Redflex sat down for lunch with this guy. very curious

All the more reason to run Redflex out of the Arizona, along with Quarles & Brady.

'Her calculation is off': Sinema dares the left to take her out

The Maricopa County Election Audits And The Intelligence Community: The Untold Story