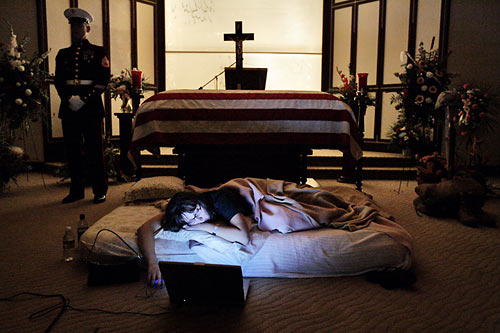 War news isn't popular anymore. The administration plays it down and the public is tired of hearing about it. In this series of articles and pictures we're forced to open our eyes and count the cost of war again. Travel with the Casualty Assistance Calls Officers and the lives that continue when a soldier falls.

2 Comments in Response to A war widow sleeps by husband's side one last time, on the floor next to his coffin.

I dunno Lucky Red. Maybe if we were there we could do that. Sometimes we honor the soldier for who he is, not what he does. And it's an old gentleman's code to leave women and children out of it.

Sometimes the code says you just allow yourself to feel human for a change and to be human with the rest of us imperfect slobs. On this one, I can just relate. I empathize with the woman and I've stood honor guard for a bro and for the people (oyate). I know what it's like to have the weight of the word on your shoulders but all you can do about it right then is stand up straight and be there for the people.

Sometimes you don't have every answer so you use the ones you have.

I would encourage you, Lucky Red, to take a posture of honor instead of outrage. To assume a position of defending the people rather than attacking them. To be a positive warrior and not always a negative. To fight for rather than against sometimes.

It is taking a big risk, because to be for something and wrong has way more hazards than to be always against and right. When you are pushing for something proactively you run the risk of disapproval and rejection if you are wrong.

Now I'll tell you a secret. Humans are programmed to accept and like leadership. They want it to be nice and fuzzy, and this flies in the face of all objectivists, but humans still have a greagarious trait, a vestigial herding instinct and they LOVE being protected and they LOVE dwelling in community. And they LOVE their protectors. In a certain sense, most humans want to be told what to do. I can see this trait easily in myself as I'm about as comfortable being a leader as I am a follower. Both positions have distinct advantages. Both are necessary to the community or in my way of thinking, the tribe or the family.

To summarize, you are great at sniping from around the periphery. Let's see you take the next step and put yourself on the line. A bit at a time. I'm not talking a suicide mission, just as you get comfortable and find your niche, take the next step and be proactive. Not all the aontributors here are "popular". Look at Frosty and Max Woody and David Hodges (who's positions usually make me get the vapors), we got Lacey who has Gonzo down to a science, there's always me spewing whatever comes to my mind at whatever moment, regardless of anything and anybody, I mean it's like we're all in the pool, water is fine, what are you waiting for, jump in.

Put another way, stop pissing in the pool kid because one day yer gonna be swimming in it. And you are either gonna jump in or one day we will surround you and throw you in it. And then you gotta do shots.

Anyways youngster, I'm glad you are sticking around, your comments are getting smarter and your humour is a commodity around here.

Ooooh, how sweet!  I wonder if the wifes and the children of the innocent men he killed in Iraq/Afghanistan/Pakistan/Yemen or wherever else that he was were able to do the same thing.

Escobar: US/NATO Versus Russia-China In A Hybrid War To The Finish

China, the Quad, and the Next "Great" War

The Cold War Was a Racket