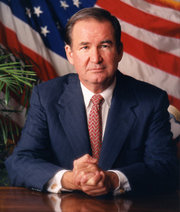 We were blindsided. We never saw it coming.

So said Goldman Sachs CEO Lloyd Blankfein of the financial crisis of 2008. He likened its probability to four hurricanes hitting the East Coast in a single season.

Blankfein was reminded by the chairman of the Financial Crisis Inquiry Committee, Phil Angelides, that hurricanes are "acts of God." Financial crises are manmade. Yet Blankfein was backed up by Jamie Dimon of JPMorgan, who said, "Somehow, we just missed ... that home prices don't go up forever."

The Wall Street titans thus conceded they did not foresee the housing bubble ever bursting and they did not consider the possibility of a collapse in value of the sub-prime mortgage securities piled up on their books.

Blankfein's plea of ignorance and incomprehension is this: The crisis killed Lehman Brothers and would have killed every one of them had not the Treasury and Fed, neither of which saw it coming, either, intervened with hundreds of billions in bailout cash.....

1 Comments in Response to Is America's financial collapse inevitable?

Yep.  The fall of the empire is near.