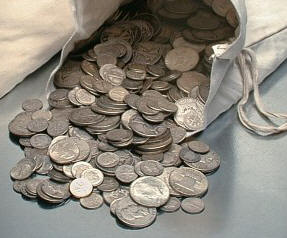 What Does Lawful Money Mean?
Any form of currency issued by the United States Treasury and not the Federal Reserve System, including gold and silver coins, Treasury notes, and Treasury bonds. Lawful money stands in contrast to fiat money, to which the government assigns value although it has no intrinsic value of its own and is not backed by reserves. Fiat money includes legal tender such as paper money, checks, drafts and bank notes.

Also known as "specie", which means "in actual form."

Investopedia explains Lawful Money
Oddly enough, the dollar bills that we carry around in our wallets are not considered lawful money. The notation on the bottom of a U.S. dollar bill reads "Legal Tender for All Debts, Public and Private", and is issued by the U.S. Federal Reserve, not the U.S. Treasury.  Legal tender can be exchanged for an equivalent amount of lawful money, but effects such as inflation can change the value of fiat money. Lawful money is said to be the most direct form of ownership, but for purposes of practicality it has little use in direct transactions between parties anymore.

1 Comments in Response to What is Lawful Money?

Wouldn't it be cool if someone went to the "Treasury Department of the United States, in the city of Washington, District of Columbia, or at any Federal Reserve bank. " per http://www.law.cornell.edu/uscode/html/uscode12/usc_sec_12_00000411----000-.html  to redeem their Federal Reserve notes for lawful money?