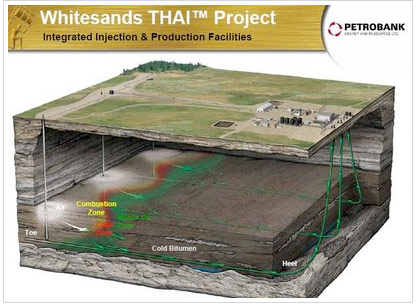 We have now revised our maximum target production for the Conklin pilot to 1500 bopd and we anticipate reaching this production level in mid 2010.
Petrobank Ramps Up THAI  Operations

CALGARY, ALBERTA--(eMediaWorld - Jan. 6, 2010) - Petrobank Energy and Resources Ltd. ("Petrobank" or the "Company") (TSX:PBG) is pleased to provide an update on our THAITM projects.

The Kerrobert THAITM project is a 50/50 joint venture with Baytex Energy Trust. This joint venture project highlights the global applicability of THAITM technology in conventional heavy oil resources. We believe that a significant portion of the estimated 20 billion of barrels of unrecovered conventional heavy oil resource in Saskatchewan can be commercialized using THAITM.

At Kerrobert, we have been on continuous air injection and the wells have been on production since late October. Since this project involves mobile oil, our original plan was to utilize temporary hydraulic pumps on each well to create a drawdown pressure across the horizontal well and, as combustion gas production increased, we would cease pumping and flow the wells by produced gas lift. As previously reported, the initial fluid production volumes were tested at 180 to 300 barrels per day per well, with oil cuts ranging from zero to 40%. However, during the transition phase to gas lift we learned that liquid inflow to the production wells exceeded the pump's capacity, which limited our ability to draw down the wells and also caused frequent pump failures. On December 21, 2009 we re-configured the pump in KP1 to improve its pumping capacity and we are currently re-configuring KP2.

Since the re-configuration, fluid production rates from KP1 have ranged from 250 to 420 barrels per day with oil cuts averaging 36% and reaching as high as 65%. We have also increased the air injection rate to 50,000 m3/day and the produced gas rate has increased to 8,000 m3/day. Well bore temperatures are rising with toe temperatures consistently in the 120 to 140 degrees Celsius range. Produced gas composition confirms high temperature combustion and we have recently measured an improvement in the API and viscosity of the produced oil. We expect to have the KP2 pump reconfigured and producing at similar rates to KP1 within the next few days.


Surface facilities have been operating smoothly with only minor cold weather and early start-up related issues. We have not had any solids or produced sand. The next expansion of our air compression capacity will be installed at the beginning of April. Due to the current pump limitations, we intend to replace them in the near future with a higher capacity design, targeting 500 barrels of oil per day ("bopd") per well. We are also finalizing our plans for the development of the initial earned lands which would encompass up to 20 additional production wells in this portion of the pool. We plan to commence this expansion in the third quarter of this year.