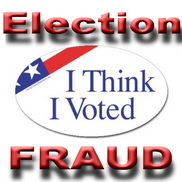 LEXINGTON, Mass., Jan. 18 /PRNewswire-USNewswire/ -- Representatives of nonpartisan election watchdog groups around the nation issued a last-minute 'orange alert,' warning that tomorrow's Massachusetts special election to elect a successor to the late Senator Ted Kennedy is ripe for manipulation. The groups call on Secretary of State Galvin to take immediate extra security precautions for the Senate race, which has become a high-stakes national contest. Critical national initiatives such as health care reform and financial reform will be influenced by the results of this election.

Unprecedented amounts of out-of-state money has funded a media blitz, and recent seesawing polls -- some highly questionable -- show Republican Scott Brown and Democrat Martha Coakley now reported to be in a virtual toss-up.

Experts are concerned that with the electronic election system in use, its lack of transparency and ease of manipulation, the public has no basis for trust in the accuracy and integrity of the election results. Confidence in election outcome should be based on objective verification rather than government reassurance, particularly when voting systems with so many known vulnerabilities and so little ability for oversight are employed.

Massachusetts elections are programmed and serviced by New England Diebold affiliate LHS Associates, a private company, located in Methuen, MA, which alone controls the trade secret software and memory cards holding all ballot and voting data. This data must be secured and held by Massachusetts election officials, experts say.

Secretary of State Galvin must immediately institute a policy and practice to ensure that public election officials and not LHS Associates maintain chain of custody over all ballots, voting machines, database files, and memory cards. Only through public possession and scrutiny of all election data can we ensure the integrity of election results.

Election Integrity expert Brad Friedman has warned that the outcome will rely on the accuracy of votes tallied by the easily-hacked electronic Diebold/Premier optical scan voting machines, featured in the film Hacking Democracy.

Friedman, writing in the Gouverneur Times (http://www.gouverneurtimes.com/st-lawrence-news/54-worldnational-news/10625-easily-hacked-voting-systems-to-be-used-in-ma-special-election-for-the-us-senate.html) (http://tr.im/KvUb) says, "The electronic voting systems used in Massachusetts are notoriously plagued with problems and vulnerabilities, and are in violation of federal voting system standards. Moreover, they are sold, programmed, and maintained by a company with a disturbing criminal background."

Friedman notes with concern, "The machines and cards are often accessed by both election officials and the private vendors who program and maintain them."

The candidates are urged not to concede the election or declare victory until election results can be verified and any bona fide election challenges resolved.

The organizations issuing the alert include: