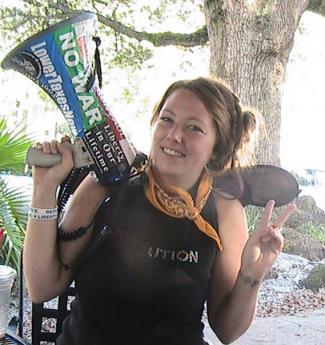 We talk to Ladies of Liberty Alliance aka LOLA December 2009 Calendar Girl Brooke "The Truth Fairy" Kelly. We discuss what she found when she dug up the Georgia Guide Stones, Being arrested for liberty 4 times this year and her new Liberty Oriented Reality show Puzzled.

At the risk of coming off as an AIR (Asshole In Return), I seriously take issue with Jet Lacey's comments that involved me as well as John Bush, some of the LOLA Girls, and the rest of the so-called activism clique that Lacey alleges to exist. (I'm speaking for John, Catherine Bleish, Tarrin Lupo, Katie Wilhite Brewer, and a number of others in the Liberty movement who are not in the unique position to speak for and defend themselves. Although I normally don't speak for anyone but myself, I'm making a crucial exception here.)

I resent -- make that beyond resent -- the comments made by Jet. Not only that, his comments strike me as damn unfair as far as I'm concerned. If what we say irritates him, then his response to the matter irritates me and my "clique" more.

My show Liberty Cap Talk Live, which is on Friday nights, have been FAR more critical of the federal Leviathan than anything in the movement. I have criticized both Bush and Obama on NowLive and Blog Talk Radio, probably in more ways than the activists in the movement care to remember. I have been honest and fair, probably much fairer than I would have liked or wanted. However, when certain individuals in the movement have done something wrong in the movement (Bob Barr and Wayne Allyn Root, for example), I have called them out on it.

Ron Paul, politically speaking, is no exception. Like it or not, believe it or not, accept it or not, embrace it or not, as a politician he's fair game just the like Congress. He's part of the ruling class whether you like it or not. He's a politician who HAS made his peace with statism -- limited statism -- whether you care to embrace that fact or not. After all, he IS a Republican. Why should he be treated any differently than the rest of that lot? Because a bunch of pro-Liberty activists happen to have and enjoy their lovefest with him? Anarchists like Tom Knapp, Stefan Molyneux, and Wendy McElroy have given shit loads of heat to the man. Why must he be treated so differently?

Keep in mind that he's a politician who was:

a.) elected to serve his congressional constituents in the 14th district of Texas

b.) elected to work for his constituency's interests and not the interests of the Liberty movement

Second, we do not hate Ron Paul the man. I'm sure Ron's a great guy and a wonderful family man, not to mention someone you'd wouldn't mind having a beer with, eat fish and chips with, go skeet hunting with, and, as some people say "shoot the shit with," but he's not above reproach. No one is. Why does he deserve special treatment for any wrongdoings he commits? Because he's a compromising politician? Because he's Ron Paul? Talk about a bunch of twisted -- not to mention moronic -- priorities you've got there.

And finally, those who object to us (including you, Jet) having an issue with what Paul has done need to take their heads out of their collectivistic asses and develop a perspective for a change. The attitude we get from your side is that, "You have no right to criticize Paul because a criticism of him is an attack on us." Balderdash! That's a bald-faced lie right there. If we wanted to do that, we would have addressed our criticisms directly towards you guys and not Ron Paul. Let's set that record straight for once, please?

Those who also seem to glorify the politically sinful actions of Paul and shove the uproar over his decision to endorse Lamar Smith under the political rug are also selling out their principles too, in the name of persecuting those for committing what they see as political heresy and blasphemy. Would you guys have been this defensive of Ron if he had chosen to endorse John McCain in lieu of Chuck Baldwin? Would you guys have said then? What would have been your excuses since then? What's the point of having principles if you're just going to be as statist as McCain or statist-lite next to McCain? (Does anyone remember the Bob Barr debacle? Anyone?)

How can we oppose the existence as well as the expansion and increase of Big Statism if the Ron Paul movement tries to cozy up to the GOP and end up being the Party's little bitch (or whore, if you prefer) and then act as though it's defending freedom when people can see through that? How can your defense of Little Statism be justified when it sullies everything that the Liberty movement is supposed to be and stands for? The only way you can light the fires in the hearts and minds of people is via persuasion, education, and civil disobedience, not via the political realm.

By "compromising" your principles, you end up letting the state shape and define you sooner and faster than you shape and define the state. Thinking that jumping into the bed of the GOP and expecting it to change to be a libertarian organization and somehow freedom will just rain down the political sky via the magic wand of the state are just fairy tales. They never have worked, don't work, and they never will work now, tomorrow, and in the forseeable future.

That's my two cents on the issue. I'm getting off my soapbox now...

Yours Truly in Liberty,

Thanks for your reply.  I get it, really I do.  And, maybe I've been a little too direct and maybe it's none of my business.  What I don't want to do is to "shit in my own nest" (meaning the freedom movement) and I do appreciate all of the new friendships I've started as a result of my participation in the movement.

BTW, I don't have an active personal blog...just Freedom's Phoenix at this time.

Keep up the great work, Tarrin.

Jet thanks for the feed back. I try and do a whole range of stories on a bunch of different stuff. I think it is just coincidental that all these stories hit at the same time. I mean 2 of them happened at C4L so that is timely, and it was just Brook's turn because were she landing in the Calender. I am interviewing all the calendar girls and trying to catch up to this month. As far as self promoting I think it is odd that you should say this since you just used the Alex Jones vs Tag incident to promote your blog. Of course I self promote, I am also trying to build viewers and make a living as a full time activist (not easy to do btw). I also believe in promoting other activism I like, in fact I liked your last blog so much I posted it all over the place and I don't even know you. I think it is natural to hang out with people with similar beliefs, but I also know if my message strays from a pure liberty message they will also be the first people to call me out on it. I think it is healthy to keep everyone grounded. I guess it is still a free market sort of, so why not just ignore the stories I do you don't like?

Youth have forever developed their own culture, icons and values. If these folks are doing something right, they will attract a following. If not, they will fade off into the sunset and somebody else will take their place.

I hope you believe me when I say I'm not trying to be a complete asshole, but this apparent "activism clique" that you, some of the LOLA girls, John Bush, Todd Andrew Barnett, et al. have going on is starting to really irritate me in certain ways.  I have met many in the clique, and I really like everyone that I have met.  That is not the issue.

But, it seems that there are some within the clique that seem to spend only a small portion of their time doing actual activism, and the rest of the time suckling on each other's metaphoric teat in order to cross-promote one other.  It is the self-branding and self-promotion that I am starting to remember more than the often excellent activism.  For instance, I loved your video on MLK’s tactic of getting kids thrown in jail, but if you peruse the recent list of videos on your YouTube channel, there are many more interviews with your “freedom friends” (that’s what my wife Beth calls mine) than on real issues.

Secondly (and more importantly), I'm beyond sick and tired of the attacks on Ron Paul the man emanating from the clique.  I say go ahead, hate that he supported Lamar Smith, hate that he believes trying to save the GOP is the right thing to do, hate the C4L (I certainly have no use for them), but it pisses me off to no end that self-described freedom activists are trying to make their names in the activist world at the expense of the one man in D.C. who has stood firm on his convictions in the face of amazing resistance for almost 40 years.  It’s detestable, really.

Tarrin, I realize I don’t know you and I’m certainly not trying to attack you personally, but I must say that I find these non-substantive, saccharine-sweet, cross-promoting puff pieces so very boring and beyond non-newsworthy.

Calgary Pastor Stands Up to The Calgary Gestapo, Again!