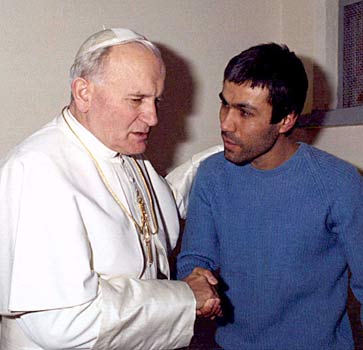 Mehmet Ali Agca didn't reveal where he plans to go, though he said in prison that he wanted to visit the Vatican. He has declared himself the Messiah and renounced weapons.
One thing is clear about this gaunt, graying figure who spent years in solitary confinement, and now lives alongside Istanbul's millions: he is a riddle, and few know his next move.
"He is very deceptive. He keeps telling lies," Sedat Ergin, former chief editor of Turkey's Milliyet newspaper, said Wednesday.
Agca was convicted of killing Abdi Ipekci, the liberal advocate who held the same Milliyet post back in 1979, but escaped from prison with alleged help from extremist associates and wound up in Rome two years later, with a gun in a crowd, waiting for the pope. Ergin described Agca as a "psychopath" who might try to make money from his notorious image in Europe, and he urged the international media and community to deny him any shred of legitimacy.
Agca — deemed mentally ill by Turkish military doctors — promotes contradiction, consciously or not.
Born in a poor region of rural Turkey, he told investigators that he acted alone when he wounded Pope John Paul II, then suggested Bulgaria and the Soviet Union's KGB were behind the attack. After his imprisonment ended Jan. 18, he raised his fist, predicted the end of the world and ostentatiously checked into a five-star hotel. Then he wanted some quiet.