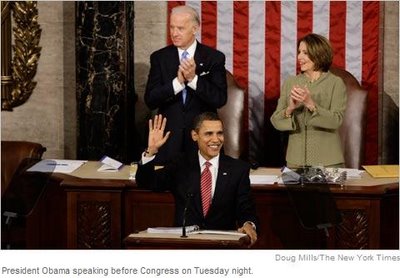 Anyone who follows politics knows that “last week” referred to the upset election of a Republican to the Massachusetts Senate seat of the late Sen. Edward Kennedy. Voters there said they wanted to send a “message” to Washington: We still want change.
In his speech Wednesday, Obama sought to reseize the change mantle, and pushed back on the notion that he was naïve to think he could change the way Washington works.
“Now, I'm not naïve,” he said. “I never thought that the mere fact of my election would usher in peace and harmony – (laughter) – and some postpartisan era.”
Obama blamed both parties for feeding divisions that are “deeply entrenched” and pointed out that philosophical differences represent the essence of democracy.
“But what frustrates the American people is a Washington where every day is Election Day,” he continued. “We can't wage a perpetual campaign where the only goal is to see who can get the most embarrassing headlines about the other side – a belief that if you lose, I win.”
Obama promised to renew his efforts to reach out to Republicans, noting that this week he is addressing a meeting of the House Republicans. He suggested monthly meetings with the Democratic and Republican leadership.
“I know you can’t wait,” he said to laughter as he glanced at the Republican side of the House chamber.
Until last week’s Massachusetts shocker, Obama’s first State of the Union was to be a different affair. He expected to have finished comprehensive healthcare reform – if not signed, at least passed in its final version through both houses of Congress. Healthcare was to be the crowning achievement of Obama’s first year in office, and in the State of the Union address, he was going to start the selling process – explaining to a skeptical public what it would do for them.
The loss of the Massachusetts seat meant the loss of the Democrats’ 60-seat supermajority in the Senate, the number of votes needed to halt a filibuster.
So instead, a chastened Obama went before the joint session of Congress and the American people, and accepted blame. He acknowledged how the complexity of the reform had made Americans increasingly skeptical.
“I take my share of the blame for not explaining it more clearly to the American people,” Obama said.

2 Comments in Response to Obama to America (and Congress): Yes, we still can

> “I will not give up on trying to change the tone of our politics,” Obama said.

Translation:  'I will not give up until I have bankrupt this nation and turned it into a socialist tyranny'