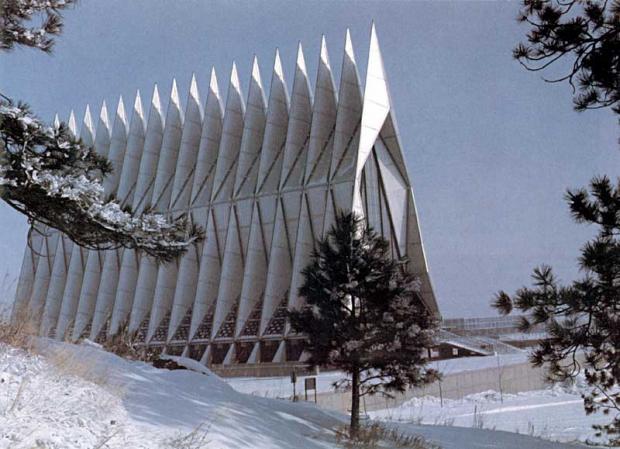 A double circle of stones atop a hill on the campus near Colorado Springs has been designated for the group, which previously met indoors.

"Being with nature and connecting with it is kind of the whole point," said Tech. Sgt. Brandon Longcrier, who sponsors the group and describes himself as a Pagan. "It will dramatically improve that atmosphere, the mindset and the actual connection."

The stones were moved to the hilltop last year because erosion threatened to make them unstable in their previous location near the visitors center. Crews arranged them in two concentric circles because they thought it would be a pleasant place for cadets to relax, Longcrier said.

When Longcrier and academy chaplains were looking for an outdoor worship space, they discovered one already existed in the form of the circles.

Lt. Col. William Ziegler, one of the academy's chaplains, said designating the space is part of the school's effort to foster religious tolerance and to defend the constitutional guarantee of religious freedom.

'A freedom thing'
"It's about our commitment as airmen to protect freedom and defend freedom. To me this is a freedom thing," he said.

The school also has worship facilities for Protestant and Catholic Christians, Jews, Muslims and Buddhists.

The academy superintendent, Lt. Gen. Michael Gould, has made religious tolerance a priority. It became a concern in 2004 when a survey found many cadets had heard slurs or jokes about other religions and that some felt ostracized because they weren't religious.

Longcrier and Ziegler said they've heard no criticism of the new worship space but both noted its presence was just made public.

"Not to say that it's not coming, but so far we haven't had any real issues," Longcrier said.

He said 15 to 20 cadets have shown an interest in Earth-centered beliefs, and eight to 10 regularly attend Monday night meetings. Of those, six or seven are devout believers and the others are "searchers," Longcrier said.

The academy has about 4,000 cadets. The school is one of five U.S. service academies, including West Point and Annapolis. Cadets graduate as second lieutenants.

Gods and goddesses
"Earth-centered" spirituality encompasses many beliefs, Longcrier said, many that recognize multiple gods and goddesses and observe holidays tied to the seasons.

Longcrier said he personally doesn't consider gods and goddesses to be actual beings but personifications of natural events that human ancestors wanted to put a face on.

"The goddess is symbolic of the Earth," Longcrier said. "Do I believe I'm worshipping this female entity living in the Earth or up in space somewhere? No. The symbolism is very important."

The group's meetings are usually devoted to mediation, lessons or ceremonies, he said.