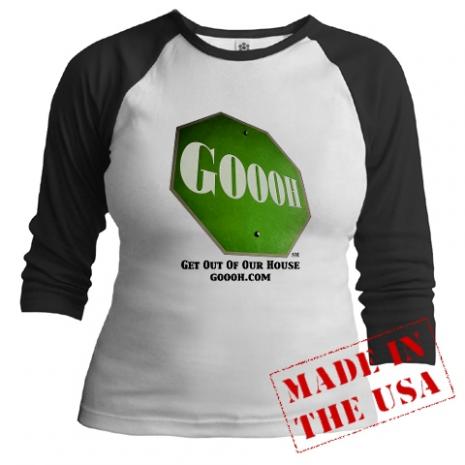 GOOOH stands for 'Get Out of Our House' and is pronounced like the word 'go'. It is a NON-PARTISAN plan to evict the 435 career politicians in the U.S. House of Representatives and replace them with everyday Americans just like you.

GOOOH is NOT just another political party. It is a system that will allow you and your neighbors to choose, among yourselves, the person who can best represent your district.

GOOOH is an evolving system and your input is requested. The questions are changing based on the feedback of members just like you. Participate in the forums, take the survey, and send us your thoughts. This is YOUR system. We will perfect it with your input.

GOOOH is a new system that will allow "we the people" to select true representatives, not choose between a Democrat and a Republican. If we continue to elect career politicians who represent their party, the special interests that fund them, and themselves, nothing will change. GOOOH is a non-partisan process that will allow us to effect the change we all know we need.

GOOOH will allow you to:

The GOOOH process allows Americans of every political leaning to participate in the selection of their District's Representative while being considered themselves. Through GOOOH's Candidate Selection Sessions you and your peers will select the candidate in your district who best represents your district's views. Even if you do not wish to become your district's representative you will want to participate in the process and have a direct say in who is chosen to represent your district. GOOOH will fund a single national campaign to promote the 435 candidates (one from each district) who are selected to run against the party politicians. Because GOOOH is a process for selecting representatives (not an agenda-based party platform) we expect a person left of center to be selected in San Francisco and one right of center in Colorado Springs -- but it will be up to the GOOOH members in each district to decide.

Originally, the founder of GOOOH proposed excluding lawyers, members of political families, and individuals with more than $11.5 million in assets (250 times the median income). They were not to be excluded because they are bad people, but because they are overly represented in government today and, generally speaking, no longer seem to represent the common man. However, based on input from our members, the Question Committee has voted to remove the exclusion of lawyers and the wealthy. Instead, it has been decided that members of these two groups must simply declare that they are a lawyer or have more than $11.5m in assets in each Selection Session in which they participate. It will be up to the participants in each pool to decide whether or not that is of concern. We believe this change is indicative of the continuing evolution of the GOOOH system.

We hope you will join GOOOH today and help us take our House back from the politicians!

For GOOOH to succeed we will need 500,000 participants. We will continue to build our base of supporters until we have the participation we need, at which time we will begin our effort to access the ballot. The rules are different in each state, and the politicians have done a great job of building barriers to prevent competition, but they have left the drawbridge down. In some states, we will form a party, call it the GOOOH party for now. In states like Washington and Texas that is not presently an option. In some states our candidates may run as Independents. In others we may run as a Republican or Democrat, even competing in the primary if time allows. We may run on some other Party’s ticket, such as the Libertarian Party or the Constitution Party. When we reach our membership goal, the rules in each state and the willingness of established parties to cooperate will help determine how we access the ballot. But one thing is certain: once we get to 500,000 members and begin our push, politicians will find themselves in an extremely difficult position justifying why a GOOOH candidate will not be allowed on the ballot. And remember, 500,000 is just the start. We will soon have five and then fifty million or more supporting GOOOH. How many state representatives are going to want to stand in the way of us getting on the ballot? We look forward to that “discussion.”

Something Fundamentally Going Wrong With Our Country

Humanity Just Hit Eight Billion On This Planet: What Does It Mean For America, Canada and Europe?