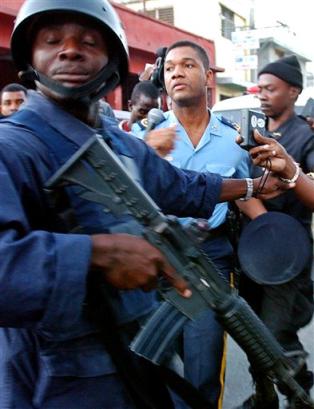 The devastating Haiti earthquake on Jan. 12 brought an immediate response from nations, agencies and individuals anxious to help. Yet it wasn’t clear how best to help, and aid was agonizingly slow in reaching those who needed it. Matt Winters is a political science professor at the University of Illinois who has studied foreign aid and its effectiveness, with a particular focus on Indonesia, which took the brunt of the 2004 Indian Ocean tsunami. Winters was interviewed by News Bureau social sciences editor Craig Chamberlain.

What worked and didn’t work in the world’s response to the 2004 tsunami? And what’s different about the circumstances in Haiti that may be slowing the aid effort there?

In Aceh, Indonesia, the place hardest hit by the 2004 tsunami, over 500 different aid agencies showed up to provide disaster relief and rebuilding support.  With that many actors on the scene – a lot of them with no previous experience in Aceh – it could have easily been a complete mess.  But the Indonesian government took a firm hand: they created a single agency to coordinate the effort; they required NGOs (non-governmental organizations) to register with and report their activities to the agency; and they arranged for government donors to pool their money.  Those steps increased coordination, allowing resources to be deployed more efficiently and effectively, and in accordance with the goals of Indonesia’s own government and citizens.

What’s the best way for individuals to help in responding to such a disaster?

People who want to help in Haiti should give money to organizations that already have an operational footprint in Haiti.  People should not send goods, which are usually more of a hindrance.  A box of teddy bears, for instance, may seem like a really nice idea for the kids of Haiti, but if the effort had gone into raising money instead, it would have a bigger impact on those kids’ lives. Get money to the organizations on the ground and let them figure out what needs to be purchased and how best to do that.

Similarly, unless you have very specialized skills, you should not be volunteering to go to Haiti.  If the only thing that you can bring to Haiti is unskilled labor, then stay home – let the Haitians themselves supply the unskilled labor.

How should they decide where to give?

It takes a little bit of research.  If someone is thinking about giving to their favorite NGO, they really need to check to see how much that organization has been doing in Haiti over the past few years.  Do they have staff already on the ground in the country who understand how to work there and can gain quick insight into how best to respond to people’s needs?

NGOs, for their part, should be honest about how much money they actually will be able to use.  Doctors Without Borders, for instance, has already asked people to stop donating specifically to Haiti and instead to give to their general emergency fund so that they can be ready for the next disaster.  Other NGOs should do the same, and those that lack the expertise to make a useful contribution in Haiti should acknowledge that and not try to raise money around the earthquake.

Looking long-term and beyond direct assistance, what can the U.S. do to aid Haiti’s recovery?

One thing is to keep the money flowing.  Everybody wants to give to Haiti right now and to see that money used right now – but in reality, some of that money is going to be most useful six months from now or a year from now.  The president of the Dominican Republic proposed a $2 billion-a-year fund to finance Haiti's recovery over five years – the U.S. and the other major donors should commit to that.  And then they should commit to some more difficult things – like letting the Haitians take the lead in terms of deciding how the money in that fund will be spent and delegating responsibility for the fund to a single organization (probably the World Bank).  In other words, donors need to work towards coordination of their aid and towards country-ownership of that aid.

Beyond just sending money, the Obama administration already has done something really important: it has offered temporary protected status to undocumented Haitian migrants in the United States, allowing them to work legally here.  According to the Overseas Development Institute, nearly three out of four households in Haiti already rely on the money sent home by overseas Haitians, so remittances are clearly going to be an important part of the long-term recovery.

Looking towards the future, I would stress again that the more we can get the Haitian government and Haitian people involved now, the better that future development outcomes will be.  In Aceh, local government was involved in the process from early on – therefore, local government was responsible for infrastructure that was going to remain behind after foreign aid workers left.  Local ownership leads to much better long-run development outcomes.