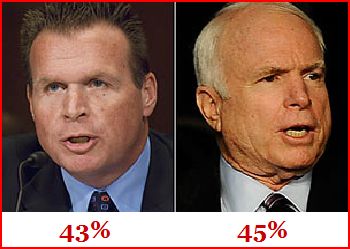 Add Americans for Tax Reform President Grover Norquist and national radio talk show host Bill Bennett to the list of conservative leaders who are backing Sen. John McCain, R-Ariz., over GOP primary challenger and former Arizona Congressman J.D. Hayworth.
Norquist, the anti-tax guru whose influence in conservative circles on tax matters recently has been on display at the State Capitol, formally endorsed McCain Tuesday during an interview on Mike Broomhead's afternoon KFYI-AM (550) radio program.
"J.D. Hayworth, the challenger, needs to explain why he lost his House seat, OK?" Norquist told Broomhead. Rep. Harry Mitchell, D-Ariz., ousted the six-term Hayworth in 2006. "If you can't get yourself re-elected to your House seat, what do you bring to the table on a Senate race? When you throw away your House seat, or throw away a race like that, it's very expensive to the rest of the party. One needs to focus on these things: getting oneself re-elected."
Norquist continues: "He (Hayworth) needs to make the case, that at a time when Tea Party activists and conservative activists and Republican regulars are being asked to raise tens of millions of dollars to win Senate seats in Delaware and North Dakota and Massachusetts, for crying out loud, why should we be asked to split up our time, energy and money to replace a perfectly good, in working condition Republican who consistently votes against tax increases and for spending restraint."
Bennett, who was President Ronald Reagan's education secretary, likewise is supporting McCain over Hayworth.
"Hayworth's views, if you put them both on paper, probably are closer to my views, but I gotta support McCain because he's the man," Bennett said on his "Morning in America" radio show. "He's the man who stands in the breach. He stood in the breach in Iraq, would rather lose the election than the war. He's the only guy who really stood up last week, that I noticed, probably a couple of others, on this 'Don't Ask, Don't Tell' (debate). And he would want my support -- and he would ask for it, I believe -- and he's going to get it."
McCain already has sewn-up the endorsements of former Alaska Gov. Sarah Palin, Sen. Scott Brown of Massachusetts and former House Majority Leader Dick Armey of Texas.
Hayworth touts his own high-profile conservative supporters, such as Maricopa County Sheriff Joe Arpaio and conservative commentators Mark Levin and Pat Buchanan.