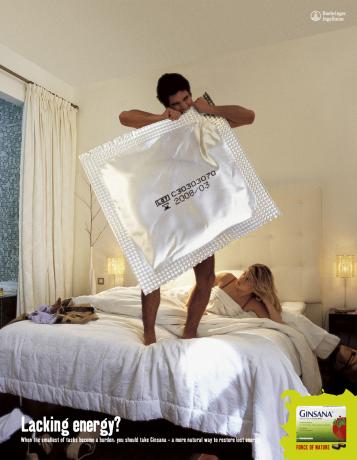 Condoms With Slogans Advocating for Endangered Species to be Handed Out on Valentine's Day
By James King in Animal Use and Abuse
Thu., Feb. 11 2010 @ 3:13PM
​
"Hump smarter, save the snail darter," is one of six, um, catchy slogans that will appear on condoms to be distributed by the Tucson-based endangered species advocacy group, Center for Biological Diversity, on Valentine's Day.
No, "don't be a whore, save a condor," is not one of the slogans, although we think it should be.

The group plans to distribute 100,000 of the condoms to hopeful fornicators in all 50 states to bring attention to the negative effects of human over-population.

As the saying goes, even safe-sex sells.

Below are the other five sogans that will be written on the condoms.


-Wrap with care, save the polar bear
-Wear a jimmy hat, save the big cat
-Cover your tweedle, save the burying beetle
-Use a stopper, save the hopper
-Wear a condom now, save the spotted owl

"All of the major threats to the earth's biodiversity -- sprawl, logging, mining, dams, pollution, and climate change -- are driven by human overpopulation," says Randy Serraglio, a conservation advocate leading the Center's overpopulation campaign. "Our Endangered Species Condoms are designed to capture peoples' attention, get them laughing, and get them talking about the impact of overpopulation on our small and fragile planet."

According to the group, the Endangered Species Condoms will be distributed in bars, supermarkets, schools, concerts, parties, and at public events by college students, university professors, health-care providers, ministers, rock bands, and grandmothers.

Great, nothing says "let's get it on" like being handed an environmentally friendly condom by someone's granny.

2 Comments in Response to So, It's Not About Eugenics? Condoms With Slogans for Endangered Species to be Handed Out

"Our monopoly on the resource pools will continue as long as they self-enslave or until they wake up from this matrix we have built for them and realize we've been giving it to them up their a** for all these years."

It's funny, that's what comedian Doug Stanhope recommends for birth control as well.  I really like him for the most part, but I wholeheartedly disagree with him on this issue.

If you believe even partially in the biological basis of behavior, you realize that "breeders" consume "too many" resources.  It is up to us, the elite, to convince the breeders to reduce their resource consumption, which, after several generations, will cause us elite to have to compete harder for the same but fewer (per capita) resources.

How can we get breeders to kill themselves (and/or their bloodlines), saving us from our bloodlines having to compete with their ever increasing numbers?

What if we called it "reproductive freedom"!  That way, even though we are fewer in number and reproduce fewer offspring, we will be the breeders and they will be the dupes!

Our monopoly on the resource pools will continue as long as they self-enslave or until they wake up from this matrix we have built for them and realize we've been giving it to them up their a** for all these years.