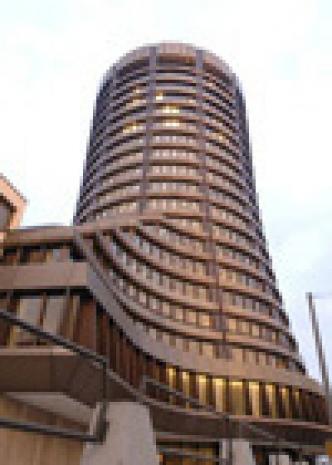 When David Rockefeller and Zbigniew Brzezinski founded the Trilateral Commission in 1973, the intent was to create a "New International Economic Order" (NIEO). To this end, they brought together 300 elite corporate, political and academic leaders from North America, Japan and Europe.

Few people believed us when we wrote about their nefarious plans back then. Now, we look back and clearly see that they did what they said they were going to do... globalism is upon us like an 8.6 magnitude earthquake.

The question is, "How did they do it?" Keep in mind, they had no public mandate from any country in the world. They didn't have the raw political muscle, especially in democratic countries where voting is allowed. They didn't have global dictatorial powers.

Indeed, how did they do it?

The answer is the Bank for International Settlements (BIS), self-described as the "central bank for central bankers", that controls the vast global banking system with the precision of a Swiss watch.

This report offers a concise summation of BIS history, structure and current activities.

1 Comments in Response to GLOBAL BANKING: THE BANK FOR INTERNATIONAL SETTLEMENTS

Further reading of literature references indicates that most "major functions of a central bank for central banks are performed by the I.M.F." B.I.S. meetings of board of directors in Basle is a useful means of central bank cooperation worldwide regarding off-setting short-term monetary movements of a speculative kind. It was in this manner that B.I.S. had carried out financial transactions for the Organization For European Economic Cooperation, Organization For Economic Cooperation And Development, European Payments Union, European Monetary Agreement, European Coal and Steel Community and the I.M.F. to stabilize the world’s troubled monetary and financial systems.

The first international paper money was created by the I.M.F. meeting in Rio de Janeiro in September 1967 and ratified in 1969. It was called S.D.R.s. It is part of the member countries’ monetary reserves. It was an answer to the problem of international liquidity which was growing less rapidly than world trade. The dreaded contraction of world trade was nipped on the bud.

The involvement of various international financial organizations whose articles of purposes conflict with each other, thus the major function of B.I.S. is "to harmonize" their contradictory financial problems seems contrary to this World Order bogeyman of which one powerful, single force is behind its creation. What seems evident is that the world’s financial system has many problems and international organizations like the I.M.F. and B.I.S. among many others, were founded to address these problems rather than to serve the dictatorial aim of a World Order schemer and his hooded accomplices.

But we can always make a conspiratorial assumption out of Patrick Wood’s Global Banking … article on B.I.S. that leads to the theory of World Order. After all terrorist-manned jetliners that rammed the twin towers in New York and the Pentagon building that we saw with our naked eye were only a theory of Bush and Cheney when in fact those were blown up by detonation explosives planted under the buildings, and by remote-controlled machine-bombs from the sky. I read somewhere that reality is only in the eyes of the beholder. So on with our conspiracy theories, dude. Don't ever give up.

The BIS Is Orchestrating The Big Switch To Digital Currency