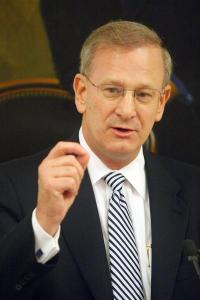 The US must fix its growing debt problems or risk a new financial crisis, Thomas Hoenig, president of the Federal Reserve Bank of Kansas City, warned on Tuesday, adding a mounting deficit could spur inflation.

Mr Hoenig said that rising debt was infringing on the central bank’s ability to fulfil its goals of maintaining price stability and long-term economic growth. “Stunning” deficit projections were putting political pressure on the Fed to keep interest rates low, infringing on its independence at the risk of inflation, he said.

“Without pre-emptive action, the US risks its next crisis,” Mr Hoenig said in a speech at the Pew-Peterson Commission on Budget Reform.

He was the only Fed member who dissented at last month’s meeting against language indicating that interest rates should remain near zero for an “extended period”.

On Tuesday he said that the worst option for the US was a scenario where the government “knocks on the central bank’s door” and asks it to print more money. Instead, the administration must find ways to cut spending and generate revenue. He called for a “reallocation of resources” and noted that the process would be painful and politically inconvenient.