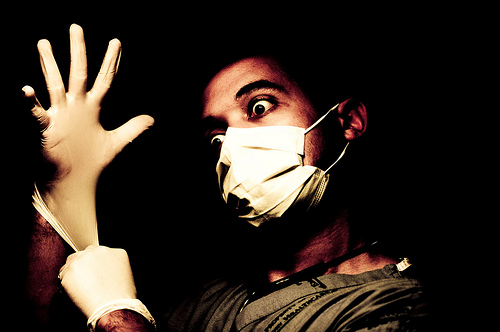 Much of the rally in US stocks has occurred on thin volumes and in the overnight trading sessions. Definitely not a vote of confidence, and a sign of potential price manipulation in fact. Is this a 'set up' to separate the public from even more of their own money, using their own money? Perhaps.
The government is frantic to restore confidence in the US markets, and the toxic asset rich banks are more than capable of using that sincere interest to unload their mispriced paper on the greater fools again.
The perception of risk is a powerful tool in shaping the response of markets, and as an instrument of foreign and domestic government policy actions. It is nothing new, as indicated by the quote from Joseph Goebbels, but it is rising to new levels of sophistication and acceptance in nations with at least a nominal commitment to freedom of choice and transparency of governance. "There is a social theory called reflexivity which refers to the circular relationship between cause and effect.
A reflexive relationship is bidirectional where both the cause and the effect affect one another in a situation that renders both functions causes and effects. The principle of reflexivity was first introduced by the sociologist William Thomas as the Thomas theorem, but more importantly it was later popularized and applied to the financial markets by George Soros. Soros restated the social theory of reflexivity eloquently and simply, as follows: markets influence events they anticipate – George Soros This theorem has become a basic tenant of modern central banking. The idea is that manipulation of the psychology of market participants affects the markets themselves. Therefore, if you artificially suppress the price of gold, you reduce inflationary expectations and reduce inflation itself…so the theory goes."
Why Do the World's Central Banks Manipulate the Price of Gold? For now we must watch the key levels of resistance around 1115 in the SP. A trading range is most probable but there is a potential distribution top forming with a down side objective around 870 on the SP 500. It does bear watching, closely, keeping in mind that this is an option expiration week, and the traders expect the market to mispresent its price discovery, as the result of conscious manipulation.

Survey Of Retail Investors Shows The Blind Lead The Blind

The Inflation They Can't Hide

Who's Hiring And Who's Firing: A Golden Age For Waiters And Teachers