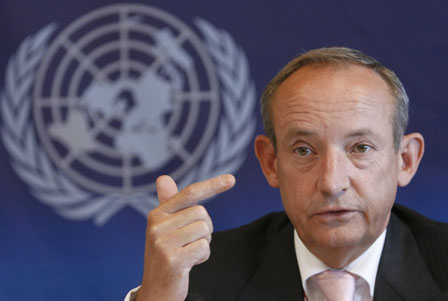 LONDON (Reuters) - The U.N. climate chief Yvo de Boer has resigned to join a consultancy group as an adviser, the U.N. climate secretariat said on Thursday, two months after a disappointing Copenhagen summit.

De Boer will step down on July 1 to join KPMG, the U.N. framework convention on climate change (UNFCCC) said in a statement. He has led the agency since 2006.

"It was a difficult decision to make, but I believe the time is ripe for me to take on a new challenge, working on climate and sustainability with the private sector and academia," de Boer said in the statement.

"Copenhagen did not provide us with a clear agreement in legal terms, but the political commitment and sense of direction toward a low-emissions world are overwhelming. This calls for new partnerships with the business sector and I now have the chance to help make this happen," he added.

Scientist Says Plastic Pollution Is Shrinking Penises, Will Make Most Men Infertile by 2045

RFK, Jr. and The Minimalists Discuss Incentivizing Companies to 'Do Well by Doing Good'

How to Turn Plastic Waste in Your Recycle Bin Into Profit

Is this the end of forests as we've known them?