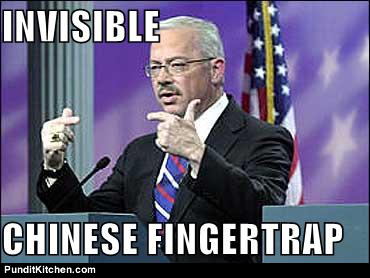 Republican congressman-turned-Libertarian Bob Barr got a chorus of jeers at the CPAC conference Friday when he declared that waterboarding is torture.

Debating the issue of whether terrorist suspects should be read Miranda rights and should have access to civilian courts, Barr argued that politicians are being allowed "to have their cake and eat it too" by choosing whether to place defendants in civilian courts or military tribunals. Barr said the Antiterrorism and Effective Death Penalty Act of 1996 provided the framework for how to deal with terrorist suspects, and said government officials should stick to that law.

"Either we believe, as lawyers, as lawmakers and as citizens, that there is value in laws, that laws that are passed have meaning and have a purpose, or we dont," Barr said.

"But I don't think that we should go down the path of allowing our leaders to have their cake and eat it too. There's nothing magical about military tribunals, they don't have necessarily better lawyers than in the civilian sector. I think I have more faith in our US attorneys, who are non-political, than my colleagues on the other side of this debate do," Barr continued.

"We can try them, we should try them. That is precisely what out law provides for. And the first time we're faced with a situation we say, 'Oh, we want to have them to go to the military, let them torture them for a while.' It's not advanced interrogation techniques. Waterboarding is torture."

That comment was met with a smattering of applause and gasps among the audience at the conservative conference, but the applause was quickly drowned out by loud jeers.

By comparison, earlier in the debate, US House Rep. Dan Lundgren (R-CA) got an enthusiastic round of applause when he declared, "I support enhanced interrogation."

Barr served as a Republican House representative from Georgia from 1995 to 2003, before switching to the Libertarian Party in 2006. He was the Libertarian candidate for president in 2008.

US Greenlights Missiles To Finland...What Could Go Wrong?

Pundits Who Advocate Hot War With Russia Are Enemies Of Humanity

Re-Visiting Russiagate In Light Of The Ukraine War

Who Wants War with Russia?

Tucker Carlson: The Elite Pedigree of a Brilliant Cosplaying "Populist"