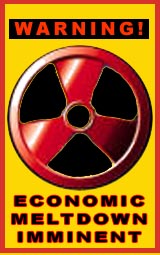 (Publisher: Oh,... definitely read this article too - Bernanke’s Fed Bills coming to a bank near you…How the Fed proposes to issue its own debt)

On the heels of the surprise discount window rate hike late last week, and on the eve of Bernanke’s Congressional testimony, speculation abounds as to the when and where of the next round of tightening.  We need look no further than the US Treasury press room, as it has announced today a revival of sorts for its Supplementary Financing Program (SFP).

Remember the SFP?  It’s back, though it really never went away.  Originally created in September, 2008 to provide a pool of funds that could be drawn upon by the Fed in emergencies without adding to excess reserves (before the Fed had the power to pay interest on excess reserves), the SFP hit its peak amount in November, 2008 at $558.9 billion.  Thereafter, it was quickly drawn down to about $200 billion by February 2009, where it remained until Treasury ran into debt ceiling issues in September and announced it would be wound down to $15 billion.  In fact, by January 6, 2010, only $5 billion remained.

“Treasury anticipates that the balance in the Treasury’s Supplementary Financing Account will increase from its current level of $5 billion to $200 billion.  This will restore the SFP back to the level maintained between February and September 2009.

This action will be completed over the next two months in the form of eight $25 billion, 56-day SFP bills.  Starting tomorrow, SFP auctions will be held each Wednesday at 11:30 a.m. EST, unless otherwise noted.”

We speculated after the September 2009 wind down announcement that it (1) would provide another $185 in liquidity for risk markets as the cash management bills that financed the program were not rolled over and returned to primary dealers, and (2) would increase demand for short term bills.  Since the process will now be reversed, it is reasonable now to believe the outcomes will be reversed as well.  Indeed, asZero Hedge noted in a similar story earlier, demand is already disappearing from indirects in short term bill auctions.

With the brunt of the $200 billion cash management bill sales expected to be picked up primary dealers, this will have the same effect as adding up to $200 billion to bank nonborrowed excess reserves (NBER) on deposit with the Fed.  As bank NBER is just north of $1 trillion, a 20% increase over eight weeks in the amount of non-borrowed money locked up at the Fed is material.  At a time when Agency and Agency MBS are drawing to a close, and with M2 money supply flat, this de factotightening move is a bit alarming.

Further, using the 13 week T-Bill rate of 0.1% as a proxy for the shorter duration 56 day (8 week) bill, it yields less than half the 0.25% paid by the Fed on excess reserves.  Accordingly, even if existing excess reserves are used to finance the SFP, resulting in a net wash in money locked up at the Fed, the marginal profit provided by this carry trade and so needed by the large banks will be materially diminished.  Under the same net wash scenario, this move could also be a precurser (test run?) for the term deposit facility proposed by the Fed.

For anyone who doubts the intent of these actions, we need only revisit the original press release by Treasury:

Today, the Treasury Department announced the initiation of a temporary Supplementary Financing Program. The program will consist of a series of Treasury bill auctions, separate from Treasury’s current borrowing program, with the proceeds from these auctions to be maintained in an account at the Federal Reserve Bank of New York. Funds in this account serve to drain reserves from the banking system, and will therefore offset the reserve impact of recent Federal Reserve lending and liquidity initiatives.

As the Fed now has myriad tools to offset the reserve impact of liquidity initiatives and is unlikely to restart such initiatives in the near term, this is purely and simply a reserve draining mechanism that will at best erode bank profits and, at worst, shrink an already precariously perched money supply.  We will analyze Fed statistics over the coming weeks and update as to which is the more likely scenario.

It’s important not to become too bearish in the short term on long term news, especially on a net down day in equities.  For those that subscribe to our daily reports, this does not affect our view that the US Dollar is topping this week and due for a modest 38% to 50% correction of the recent up leg.   A concurrent equities rally would still accompany, but we are now less confident in its ultimate potential.