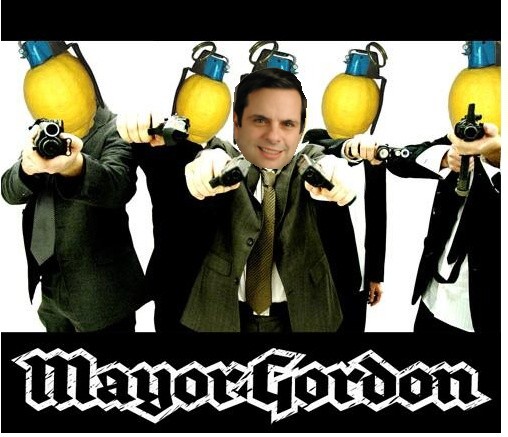 What do Downtown Phoenix and Sand Castles in Dubai have in Common? Both are dismal failures and each is what Gordon leaves behind.

Both are dismal failures and each is what Gordon leaves behind. The first mirage in the desert comes to a predictable end. Dubai's desert dream turns out to be a huge scam.

Phoenix development such as the downtown ASU campus is also a mirage and has already blown away squandered opportunities resulting in not enough revenue to maintain a large city.

Dubai and the City of Phoenix were two large cities on a parallel course driven to nothing more than a mirage or by a clever scam.

The Mirage in the Desert: the Sting begins to take Shape in Dubai
A man in a hurry, Sheikh Mohammed created rival building arms and investment managers and spurred them to compete with each other for land and capital. At one point he had at least three private-equity operations going at once under his aegis. These units invested heavily outside of Dubai at the top of the market, using borrowed money. Banks, too, bought into the Sheikh's vision, or at least wanted to be included in the charmed circle.
The boom years of the early 21st century were good for many people, but perhaps no one enjoyed them more than Sheikh Mohammed bin Rashid al Maktoum, the ruler of Dubai. Stripped to its essentials, Dubai is a sweltering strip of sand blessed with a natural harbor known as the creek, which has been an entrepot for merchants and smugglers for centuries. Building on his father's vision, Sheikh Mohammed turned Dubai into a 21st Century boomtown, luring western financiers and tourists with gleaming steel and glass towers, vast beaches, and green golf resorts.
Dubai is a clever blend of audacity and architecture, a shiny monument to the egos and ambition that turned a tiny emirate into a Middle East financial giant. Russian oligarchs stroll along man-made islands shaped like palm trees, and sheiks race down a ski slope built inside a shopping mall.

Cranes like countless arms moved across a skyline that grew more crowded by the day, if not the hour. The world's tallest building went up, highways looped through the desert, the airport never closed. Dubai expanded into a commerce crossroads for Asia, Europe and America, a place of cigar salons, horse races, a seven-star hotel and suitcases full of money.
Charmed by Mohammed's personality, marketing skills and assurances, deposed politicians, oil tycoons, powerful executives and investors poured in billions and willingly participated in Dubai's real estate bonanza — no questions asked — as did professionals from Europe and Asia who flocked to the emirate, paying for condos and villas before building even started.
Lacking the oil reserves of the emirate's neighbors, Dubai's ruling family created a parallel economic reality fueled by real estate, international investment and the art of the possible. The emirate was fashioned into a sleek cityscape of startling images: Islam balanced against the seduction of Western capitalism, and tribal traditions brushing the fleeting trends of globalization.
Sheikh Mohammed lured investors with futuristic projects but now they're left with $80 billion in debt, little confidence in Dubai, and growing questions.
When the confidence game came to an end, Sheikh Mohammed called for a standstill on debt repayments at one of his most important companies, Dubai World, rocking world markets and raising huge questions about the future of Dubai.
Dubai was always a confidence game — a momentum play. Unlike Saudi Arabia or Abu Dhabi, the hugely wealthy emirate to the West, Sheikh Mohammed had scant oil production to fuel his grandiose ideas. Instead he sold the world on his vision of Dubai as a hub for the Middle East, western Asia, and Africa, attracting investment from his wealthier neighbors — both Arabs and Iranians — and increasingly, from the West and Russia.
For a while, it worked.
Western bankers, investors, CEOs and politicians looking for Dubai Investors fell over each other to book space in his Dubai International Financial Center, a handsome if somewhat over-the-top real estate project aimed at being the Wall Street of the Gulf. They went to Dubai to worship the Sheikh, whom they treated as a sage.
The politician making the most trips to pay homage to the Sheikh was Phil Gordon, Mayor of the City of Phoenix, Arizona, who made 4 trips to Dubai in 2008 and 3 trips in 2009, with each trip done with great fanfare but in truth, each was nothing more than smoke and mirrors.