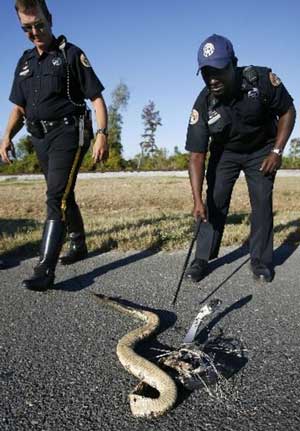 NEW ORLEANS — In Hurricane Katrina's chaotic aftermath, police shot six people – killing two – as they crossed a bridge in search of food. For years the case was a shocking symbol of the confusion and violence that swept through the flooded city. On Wednesday it became a mark of shame for the police department.

As victims' relatives watched from the courtroom gallery, a retired lieutenant who supervised the department's probe of the shootings pleaded guilty to orchestrating a cover-up to conceal that police gunned down unarmed civilians.

Michael Lohman, a 21-year veteran of the force, pleaded guilty to a charge of conspiracy to obstruct justice. Prosecutors said Lohman and other unidentified officers conspired to fabricate witness statements, falsify reports of the incident and plant a gun in an attempt to make it appear the killings were justified.

U.S. Attorney Jim Letten said the investigation is continuing and would not say whether higher-ranking officials of the police department might be involved.

Lohman's plea brought at least some closure to families of victims in the best-known of several violent incidents that raised questions about police conduct immediately after Katrina. The shootings happened on Sept. 4, 2005, six days after the storm smashed levees and flooded 80 percent of the city.

Survivors have said the officers fired at unarmed people who were crossing to get food at a grocery store. The officers claimed they opened fire only after being shot at. Ronald Madison, 40 and mentally disabled, and James Brissette, 19, were killed and four others were wounded.

"We are very, very happy about the progress that the FBI and the U.S. Justice Department have made," said Romell Madison, Ronald's brother. "The people of New Orleans should be relieved that there is still justice for everybody here."

Lohman's plea marked the first conviction in the case. Seven officers were charged with murder or attempted murder but a state judge threw out all the charges. Federal authorities then stepped in to investigate.

The federal prosecutor said Lohman is cooperating with investigators who want to know more about the police department's actions.

During Wednesday's hearing, Lohman, 42, answered U.S. District Judge Ivan Lemelle's questions in a soft voice but didn't interact with the victims' relatives. He is free on $50,000 bond and the maximum sentence he faces is five years in prison and a $250,000 fine. His sentencing is scheduled May 26.

Described by fellow officers as a straight-shooter and hardworking, by-the-book cop, Lohman's cooperation is expected to be helpful as authorities examine a wide range of problems in the police department after Katrina.

The department's reputation – never sterling in a city where violent crime is a daily fact of life – was hammered after Katrina with charges that officers were involved with shootings, deserted their posts, looted shops and made off with cars from a Cadillac dealership.

"It looks like the blue code has been broken," former U.S. Attorney Harry Rosenberg said. "Remember, those officers stood shoulder to shoulder when it was in state court. Nobody said anything."

The "blue code" is likely to face further tests with Lohman's cooperation as federal prosecutors probe the fatal shooting by police of Danny Brumfield Sr. outside the New Orleans convention center; the death of Henry Glover, whom witnesses claim died in police custody; and the fatal police shooting of a Connecticut man, Matthew McDonald.

Police have pointed to the extreme conditions they were operating under after Katrina. Communications failed, hundreds of police vehicles were destroyed, 80 percent of the force lost their homes to the storm and there were several reports of rescuers being fired upon. Most of those reports were later discounted.

"The constitution applies 365 days a year," said Thomas Perez, head of the Justice Department's civil rights division. "There are no grace periods from the constitution. The rule of law does not get suspended."

In unsealing the case against Lohman, prosecutors drew a picture of how the shootings at the Danziger bridge immediately spawned a cover-up.

Lohman went to the scene and saw no weapons near or with the victims of the shooting, federal officials said, and concluded the shootings were not justified.

The documents allege Lohman and an unidentified investigator he supervised drafted different versions of false reports. Among the claims was a fabricated statement by one of the victims that she had seen her nephew and others firing guns on the bridge.

Federal officials say Lohman drafted his own 17-page false report after becoming dissatisfied that another investigator's false account was not logical.

"On several occasions in or about October 2005, defendant Lohman reviewed drafts of the false report written by the investigator and counseled the investigator on ways to make the story in the report sound more plausible," according to court documents.

When another investigator planned to plant a gun at the scene, Lohman just asked him if it was "clean," meaning it couldn't be traced, according to the documents.

The documents said Lohman also told the investigator to speak with each of the shooting officers to ensure they were "OK with" the false report and were willing to give statements consistent with it.

"It's pretty incredible stuff," said Gary Bizal, attorney for Jose Holmes, Jr., who was shot several times as he lay on the ground. "It's like a script from Hollywood."

As the investigation continues with Lohman's cooperation, officers for at least two other officers have identified their clients as targets.

"Now the government has a cooperating witness and it causes those officers to wonder if they should be running to the U.S. Attorney to look for a deal," Rosenberg said.

"The investigation is going to attempt to bring all perpetrators to justice," Perez said.

A TIMELINE OF THE CASE

Sept. 4, 2005: New Orleans police, responding to a call of gunfire on the Danziger Bridge, shoot six civilians, two of them fatally. Lt. Michael Lohman assigns the investigation of the incident to Sgt. Arthur Kaufman.
October 2005: Kaufman submits a first draft of his investigation for Lohman's review.
August 2006: Families of the Danziger shooting victims file a series of federal civil lawsuits against NOPD.

Feb. 8, 2007: A Times-Picayune story notes profound flaws in the police investigation into the bridge incident.

Aug. 13, 2008: Orleans Parish Criminal District Court Judge Raymond Bigelow tosses out the state's case against the "Dangizer Seven," saying the case was tainted by a prosecutor.

Aug. 5, 2009: FBI seizes files from NOPD homicide division, including files belonging to Kaufman and Sgt. Gerard Dugue, who helped with the investigation of the Danziger incident.

Sept. 26, 2009: FBI shuts down Danziger Bridge for a day in order to reconstruct the scene from the day of the shootings.

Feb. 3, 2010: Prosecutors file under seal a bill of information charging Lohman with conspiracy.

It shows Officer Lohman was an experienced hand at fabricating reports.

Prosecutors said Lohman and other unidentified officers conspired to fabricate witness statements, falsify reports of the incident and plant a gun in an attempt to make it appear the killings were justified.