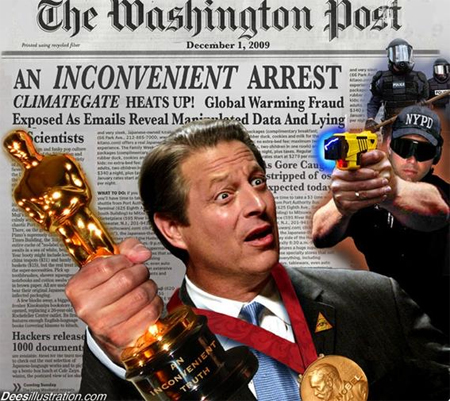 Leaked policy documents reveal that the United Nations plans to create a “green world order” by 2012 which will be enforced by a structure of global governance and funded by a gargantuan $45 trillion transfer of wealth from richer countries, as the globalists’ insidious plan to centralize power, crush sovereignty while devastating the economy is exposed once again.

As we warned at the time, the failure of Copenhagen in December did not spell the end of the global warming heist, but merely a roadblock in the UN’s agenda to create a world government funded by taxes paid by you on the very substance you exhale – carbon dioxide.

Using the justification of the vehemently debunked hoax that carbon dioxide is a deadly threat to the planet, the UN is already working to resurrect the failed Copenhagen agreement, with a series of new Copenhagen process negotiations set to take place in April, May and June.

Leaked planning documents (PDF) obtained by Fox News lift the lid on the UN’s plan to impose global governance by the time of their 2012 World Summit on Sustainable Development in Rio, which will mark the 20th anniversary since the notorious “Earth Summit” held in the same city.

“The new Rio summit will end, according to U.N. documents obtained by Fox News, with a “focused political document” presumably laying out the framework and international commitments to a new Green World Order,” reports Fox News’ George Russell.

“Just exactly what that environmental order will look like, and the extent of the immense financial commitments needed to produce it, are under discussion this week at a special session in Bali, Indonesia, of the United Nations Environment Program’s 58-nation “Governing Council/Global Ministerial Environmental Forum,” which oversees UNEP’s operations.”

The document outlines the globalist’s mission to enact a “radical transformation of the world economic and social order” by putting “a new treaty in place as the capstone of the Green World Order”. This system will be managed by “an additional governing structure composed of exactly those insiders,” writes Russell.