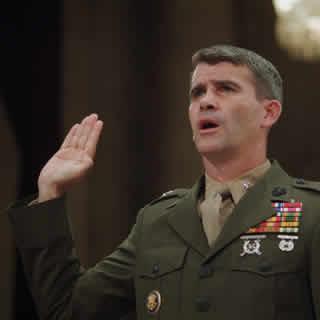 Oliver North has a piece at Townhall: The Other War

WASHINGTON — It’s a war the so-called mainstream media apparently have decided to ignore. Though its death toll is higher than Iraq’s and Afghanistan’s combined, it evidently isn’t worth covering; and unless you’re reading this in the Southwest, you probably haven’t even heard about it.

The conflict, a full-blown narco-insurgency, has claimed the lives of more than 17,000 combatants and innocents, threatens to undo several democratically elected governments and poses a real and present danger to the United States. It’s not the one being fought in Afghanistan. It’s the war being waged from the Andean basin all the way north to the Rio Grande.

Yes, he’s discovered the drug war in Mexico. I’m not sure where he’s been, but I think there’s been a little bit of press of this one. I know it seems like I see a lot of coverage, but I’m particularly interested in the topic, so maybe I’m imagining it? Nope. According to Google News, there have been over 4,000 articles in the mainstream media in the past year with “Mexico” and “drug war” — the topic that the mainstream media has supposedly ignored.

Now, there probably should be even more coverage, but it’s not exactly flying under the radar.

North goes on to recount some of the violence that has gone on in Mexico – all old news to us. Of course, he acts like he has some special ability to talk about this subject since his “Fox News team accompanied DEA and Customs and Border Protection agents on patrols.”

And, of course, Oliver North knows what must be done. He’s got it all under control…

Let’s take a moment and remember who we’re talking about. This is Oliver North. Lawbreaker extraordinaire. He didn’t break small laws, no, he broke laws set by Congress having to do with relations with other countries.

He broke the law and sold weapons — not to someone on the street, but to Iran (yes, the country that the Fox News crowd is so terribly afraid of) and then he used the money to fund the Contras — a revolutionary group in Nicaragua that mostly targeted civilians (isn’t that what we call terrorists?) and then destroyed records of what he had done. Because he was offered immunity to testify to Congress, he never had to pay for his crimes. Instead, he was richly rewarded.

North isn’t any run-of-the-mill lawbreaker. Oliver North, and most of the Iran-Contra gang, are neocons, with their own internationalist agenda — one that can’t be bothered with things like laws, Congress, or the Constitution.

And you can bet that his sudden concern for the violence in Mexico has more to do with how that can be used for his own agenda.

So, what is this criminal’s solution to the drug war in Mexico?

If the Obama administration is serious about stopping the violence threatening Americans from our southern border, it needs to initiate some urgent diplomacy to reinstitute our access to SWIFT data — and stop talking about “legalization.”

And why would North want that discussion to stop (assuming it was even happening)? He doesn’t give a single reason why legalization is a bad idea, and, of course, we know that it’s the only idea that will actually work. He just tosses it out as if it was self-evidently a bad idea.

Instead, he proposes that we infiltrate SWIFT. What’s that?

The Society for Worldwide Interbank Financial Telecommunication (“SWIFT”) operates a worldwide financial messaging network which exchanges messages between banks and other financial institutions.

A series of articles published on June 23, 2006, by The New York Times, The Wall Street Journal and The Los Angeles Times revealed that the Treasury Department and the CIA, United States government agencies, had a program to access the SWIFT transaction database after the September 11th attacks called the Terrorist Finance Tracking Program.

After these publications SWIFT quickly came under pressure for scrutinizing data privacy of its customers by letting a foreign government agency access sensitive personal data. In September 2006, the Belgian government declared that the SWIFT dealings with U.S. government authorities were, in fact, a breach of Belgian and European privacy laws. Additionally, the U.S. government has submitted “useful” data to U.S. companies (manufacturer – customer relations, prices, etc.).

So North is going to attack the cartels’ finances by having the U.S. Government snoop on world-wide legitimate banking information systems (all, of course, done in the name of terrorism and the drug war, and not to be used for any other reasons… right).

I really don’t see how having inappropriate access to SWIFT is going to help find the bundles of cash hidden in the gas tank of the Honda Accord crossing the border, which is then used by the cartels to pay off police and buy their own banking officials. No, by the time SWIFT chatter could do any good, the money has already successfully created the cartels’ power.

The only real option is to stop the money before it heads to the cartels, and that requires legalization.

Oliver North should be writing a column for the federal Pound-Me-In-The-Ass Prison Daily, not Townhall. He has no interest in solving the drug war in Mexico (his pathetic “ideas” in the column demonstrate that handily). All he sees is an opportunity to shoehorn his neocon agenda into an issue.

It’s a trait that is particularly dangerous about the neocons — they have absolutely no moral compass, and are willing to lie about anything if it can help their agenda (just listen to William Kristol any day of the week for examples). Unfortunately, there are a lot of people out there that can be swayed by neocon lies and appeals to fear, and induced to act against their own interests and those of the American people.

So we have to fight back by pointing out the dishonesty whenever it appears.

A related aspect to the Mexican/American drug war is the proliferation of weapons of military derivation used by the cartels - including tossed grenades and RPG's alongside the pintle mounted machine guns.  Of course the Mexican and American governments are trying to link these military weapons to American civilian's access to weapons of self defense so they can  legislate against them.

I'm of the opinion the people trying to obtain the small calibre single shot defense weapons in Mexico are non-cartel aligned Mexican civilians.  It may be against the law to own them but their love of live is overriding their fear of the law.   And, as always there are businessmen willing to take a chance to make a profit - nothing wrong with that!  The Mexican law enforcement agencies are infiltrated and ineffective - the cartels have begun, not weeks but months ago, to take out civilians in the way.  All of this will calm down when enough civilians have enough weapons to restrain the blatant  disregard for life displayed daily against Mexican society.

He wants to corner the crack market. Time to end prohibition peoples!

The author is quite correct in stating that RE-legalization is the only thing that will have a positive impact on the so called war on drugs.

I advocate RE-legalization because that move would actually save lives. Dispensing now illegal drugs should be done by the states, not the feds. There should be a uniform code or law that insures all the states have manufacturing processes, uniform quality, uniform dosage & low prices. Consequence Of Use Education of these should be mandatory, as some illegal drugs are almost as deadly as Rx drugs. Quality & potency would be uniform insuring many fewer over dose deaths. Crimes committed to get money for addictive drugs would drop & save lives. Law enforcement killing of innocents would also stop. LEOs have killed many more innocents than has cannabis. Cannabis does not kill. Cannabis is even safer than aspirin.

Cannabis should be RE-legalized straight up. Treat it like alcohol. We can make beer or wine at home, so why cannot we grow our own cannabis? Honest research will show that alcohol is by far more dangerous than cannabis & has fewer medical benefits. Research what drugs the Columbine & other school shooters were on or had been taking before they shot up their schools. It was LEGAL Rx drugs. I have yet to see cannabis mentioned in the reports.

I do not say that everyone should start using drugs. That can be a dangerous path...But those who use now should not have to worry about some big brother gov agency breathing down their back. Plus the real gate way drug, media churned curiosity regarding the 'forbidden fruit' would be greatly negated. Remember, the war on drugs has cost liberty & freedom in many areas. Prohibition gives big bro gov an excuse to bring in a bit of Fascism, for our own good of course.Re-legalization & state operated dispensaries could provide a safe environment for those stupid enough to try crap like meth, heroin, crack, X or what have you. Also dispensaries could provide a support group for those who want to quit dangerous addictive drugs when they realize what a stupid mistake they have made by using them for recreation. According to Law Enforcement Against Prohibition the % of addicts in the US has stayed at about 2% for a long time. They polled & found that some 98 or so % would not start using dangerous drugs if & when RE-legalized.

I keep saying "RE"-legalized because ALL drugs were once legal. Again, according to LEAP, even when all drugs were legal the addicted % of the population stayed about the same. In fact, in the Colonies it was once illegal not to grow hemp.

Opponents of RE-legalization call the idea surrender. But RE-legalization is not that. It is only a change in tactics. Prohibition of drugs, like alcohol, has been a dismal failure. Prohibition is good for crooks like North& the cartels, but not so for the people 'on the street'.Drugs are more plentiful now than ever. Most every one who wants them do so now. Illicit  drug use is more than likely at the saturation point now.

We must take the $ from the crooks if we want them to stop sending drugs into their markets. Prohibition makes them rich & powerful. We must end that.

What used to puzzle me is this: LEGAL Rx drugs, 'whose side affects may...' be dangerous, kill many times more than prohibited ones. But no one says any thing about the LEGAL drug cartels, the synthetic Rx script drug industry. No media that I know of, except for RE-legalize groups like LEAP, ASA, NORML & MJ grow websites has pointed out this glaring, insane & deadly hypocrisy.

Ollie should be in prison, no doubt.

Then there is the outlandish waste of $ that it takes to fight this lost war. The USA cannot afford this war. Out debt is just to HUGE!!

The Destructive Futility of the Drug War