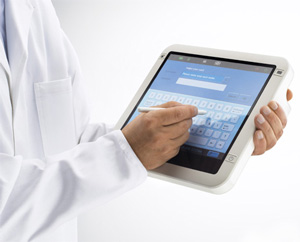 “Under the Federal, Food, Drug, and Cosmetic Act, HIT software is a medical device.” That’s according to Dr. Jeff Shuren of the FDA, as quoted by attorney Bradley Merrill Thompson in his most recent article in MobiHealthNews. Shuren is the new director of the FDA’s Device Center. My presentation at the MHealth Networking Conference in Washington, D.C. warned of the potential regulation of mobile health devices by the FDA, and based on this recent information the extent of regulation could be far more expansive than I anticipated.
Will the FDA move to regulate a much broader swath of “HIT software?” New regulation could include EHR software itself, as well as the systems and devices that supply, extract and exchange clinical data. Even HIEs could be regulated to some degree. One could dismiss Dr. Shuren’s testimony as the speculations of an overachieving bureaucrat, but the political and factual context surrounding his statements actually makes them much more significant.
Immediately prior to Dr. Shuren’s testimony, Senator Chuck Grassley sent letters to 31 hospitals and health systems asking them about the “…difficulties and challenges associated with HIT implementation.” Grassley, ranking Republican on the Senate Finance Committee and a powerful and well known legislative leader, was among the members of Congress who participated in President Obama’s February 25th Health Care summit.
Grassley’s letter to the hospitals states: “The reported problems appear to be associated with administrative complications in implementation, formatting and usability issues, and actual computer errors stemming from the programs themselves, as well as, interoperability between programs. For example, I have heard from health care providers regarding faulty software that produced incorrect medication dosages because it miscalculated body weights by interchanging kilograms and pounds.”
This is not just a short-term initiative from Grassley. Last fall he wrote letters directly to Cerner Corporation, 3M Company, Allscripts, Cognizant Technology Solutions, Computer Sciences Corporation, Eclipsys, Epic Systems Corporation, McKesson Corporation, Perot Systems Corporation, and Philips Healthcare regarding his concerns. It is quite clear that Sen. Grassley wants the FDA to take a stronger role in regulating HIT products and, one could imply, to begin regulating currently unregulated products such as EHRs.
Reinforcing Grassley’s concerns, Dr. Shuren’s testified that the FDA had received 260 voluntary reports of HIT-related malfunctions with the potential for patient harm. Of those reports, 44 included injuries and six reported deaths. Since these were voluntary reports, the FDA is concerned that many other incidents may have occurred but have not been reported since such reporting is not required.
What are the implications of this potential increase in regulation? There are many, but one big one would be a potential reduction in the number of smaller startups in the HIT space. The requirements of FDA regulation and concerns that an unregulated product might become regulated would require startups to either take greater business risk. If they found themselves to be a regulated product, or evolved their product into regulated territory, they could face significant unanticipated expenses and potential withdrawal from the market if unable to meet the regulatory timetable. This prospect could easily scare off potential investors unwilling to accept the financial or legal risk.
Another alternative for startups and other small HIT companies would be to line up enough funding to cover actual or anticipated regulatory expenses. This might or might not be possible depending upon the product’s potential and the enthusiasm of current and prospective investors.
Regulation would also encourage consolidation of existing companies. Smaller companies will seek shelter by being acquired by larger companies. Larger acquirers who already have FDA regulated products would dominate because they could apply their existing regulatory compliance infrastructure to new products more easily than a company not currently contending with FDA regulation.
Finally, and on the more positive side, HIT companies and developers will be forced to adopt more stringent development and testing standards increasing costs, but creating more reliable, more accurate and safer software. That would be a benefit to providers currently struggling with certain HIT vendor’s software and support issues. And, of course, patients and insurers would benefit from a reduction in whatever injuries and deaths may be currently being caused by software errors.