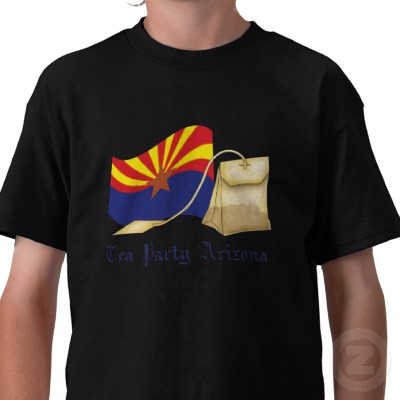 The joint statement from the Tucson Tea Party, the Greater Phoenix Tea Party, the Flagstaff Tea Party and the Mohave County Tea Party declared that any endorsement would not be “appropriate.”

“We stand for principles and ideas, not for politicians or parties,” said Patrick Beck, organizer of the Mohave County Tea Party. “Our mission is to promote constitutional government and fiscal responsibility and to inform people so that they can make their own decisions.”

“It is not appropriate to make an endorsement in this race at the drop of a hat, as some other groups are doing,” added Kelly Townsend of the Greater Phoenix Tea Party. “The movement must stand for ideas and do everything possible to provide information to people so that they can make the best personal decisions.”

But in their statements Monday, the tea party organizers made clear they don’t identify him as their leader.

“The tea party is a non-partisan, grassroots movement that stands for limited government, free markets and fiscal responsibility. Both McCain and Hayworth’s records during their many years in Washington leave much to be desired on these issues,” said Robert Mayer of the Tucson Tea Party. “It is their job to hold themselves up to these values and fight for our votes.”

1 Comments in Response to Tea parties hold out on J.D. Hayworth (It's an 'Arizona Thing')