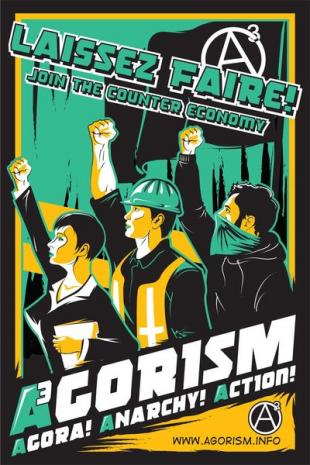 Special to The Libertarian Enterprise

There are a lot more Joe Stack incidents out there waiting to happen. The country is a powder keg and there are lots and lots of angry people. As the calendar winds around again to 15 April, many taxpayers are fed up, out of work, unable to make ends meet.

Individuals interested in a stateless society can find the incipient Joe Stacks and talk to them about agorism. What if Joe Stack had withdrawn? What if he had picked up stakes, disappeared, gotten help getting off the grid? What if he had been persuaded not to kill, but to live? What if, in short, John Galt had gotten to him first?

The answer to the system is not to attack it with violence, even in retribution, even in defense. Because doing so won\'t work all at once. And whatever one would attack with force the system will resist—it is adept at doing so. It is great at finding scapegoats to blame, magic bullet theories to focus attention, and stirring up the mindlessly patriotic and gung ho "our team forever" types. Attacking the system is certainly tempting, but it is very unlikely to succeed.

Whereas withdrawing from the system has proven merit. It has worked for tens of millions already. Last count, in testimony the IRS gave to Congress in 1998, there were over 60 million Americans who should have been filing who were not. The police state would like to find them. I do my part to help them stay secret.

I mean to confound these buggers. I mean to share the possibilities of agorism with the frustrated, the pissed off, the "touched by government" who are in my community. Wherever that happens to be.

I say let Joe Stack\'s choices not be in vain, but also let them not be repeated. It is time to do more than go to Galt\'s Gulch, it is time to share the ideas of Galt with the productive and frustrated.

Jim Davidson is an author, entrepreneur, and anti-war activist. His 1990 venture to offer a sweepstakes trip into space was destroyed by government action as was his free port and prospective space port in Somalia in 2001. His 2002-2007 venture in free market money and private stock exchange was destroyed by government action in 2007. He\'s going to Mars if he has to walk. His second book, Being Sovereign is now availble from Lulu and Amazon. His third book Sovereign Self-Defense will be released for Kindle soon. His fourth book Being Libertarian will be available for free download as a .pdf, being a compilation of all his essays and letters in "The Libertarian Enterprise" since 1995. Contact him at indomitus.net or houstonspacesociety.org.

1 Comments in Response to Stack and Galt

It is both frustrating and liberating to know that all we can do is talk their ears off and hope they listen. I definitely understand the impulse to violence - every time I see even a minor injustice my blood boils and I want to dive into the mix, fists flying. It takes all that rationality in me to remind myself to choose my battles and fight smart. I hope I can help bring that to others and show them that there are other paths, though I'm still walking them myself and I'm not sure yet where they lead. :)