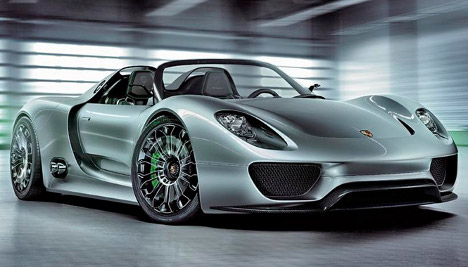 Porsche unveiled a futuristic hybrid supercar this week that it claims can hit 100km/h in just 3.2 seconds while emitting just a tiny fraction of the carbon put out by most sports cars.

Porsche unveiled its creation at the 2010 Geneva Motor Show. It claims the car has a top speed of 320 km/h but uses just three litres of fuel for every 100 kilometres - equivalent to 94 miles per imperial gallon.

Click here for a photo gallery of the 918 Spyder.

“We are a sports car manufacturer and that means its about driving fast – but at the same time about cutting pollution and conserving natural resources,” Porsche chief Michael Macht said according to the website of news magazine Der Spiegel.

Critically, the Spyder emits an average of just 70 grammes of carbon dioxide, the firm claims. According to Britain’s Department for Transport, the third-generation Toyota Prius – the best-known hybrid car – emits 89 g/km.

Many conventional supercars, including models made by Ferrari and Lamborghini, emit between 400g and 500g of carbon per kilometre.

Could We Harness The Tremendous Power Of Deep-Ocean Volcanoes?