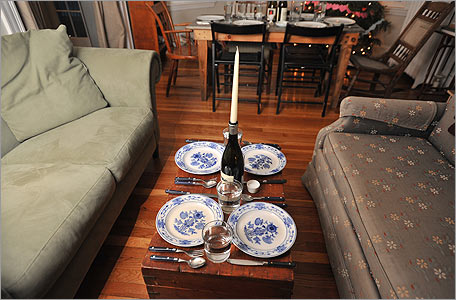 “Restaurants are great - it’s loud, they give you a menu, and then they bring you whatever you want. And dinner parties are great, but then you have one person paying this huge sum of money. I guess this is my way of creating something sort of in between,’’ says X. “My favorite conversation is hearing everyone sit around and say, ‘So how do you know about this place?’ ’’

I first meet chef X in a local library and he slips me a brown business card with nothing but his name typewritten on the front (that is, written with a typewriter), and the words “wink supper’’ scrawled on the back in longhand. I flip it over a couple of times. “And how do I get in touch with you?’’ I say. “You don’t,’’ he says, sliding a white pad of paper and a pen across the table. “I’ll e-mail you.’’

X’s alias is more than a nod to the cloak and dagger. Wink and outfits like it are illegal. They take paying customers but they’re off-limits to and off the radar of city health inspectors. Called supper clubs or underground restaurants, their modern roots in the United States are firmly planted in Portland, Ore., in the early 2000s, where the underground scene helped put that city on the culinary map. Since then it has spread all around the country, a genre of vice that most people, if not tempted to try, would find relatively harmless, amounting to chefs serving patrons at makeshift tables in their own homes. Still, for X, it is a genre not without risk. The last time the Globe covered an underground restaurant, a charming little place called Love+Butter, the owners got spooked by an e-mail from a health inspector, took down their website, and for all intents and purposes, disappeared.

California Homebuyers Discover that the Government Is Their Enemy

Rent Control Is Making a Comeback in US Cities--