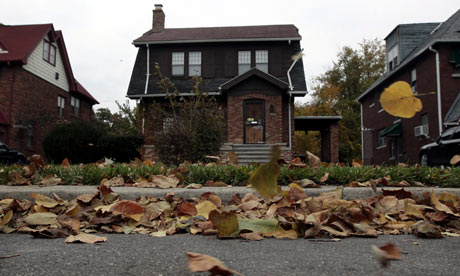 Some might say Jon Brumit overpaid when he stumped up $100 for a whole house. Drive through Detroit neighbourhoods once clogged with the cars that made the city the envy of America and there are homes to be had for a single dollar.

You find these houses among boarded-up, burnt-out and rotting buildings lining deserted streets, places where the population is shrinking so fast entire blocks are being demolished to make way for urban farms.

“I was living in Chicago and a friend told me that houses in Detroit could be had for $500,” said Brumit, a financially strapped artist who thought he had little prospect of owning his own property. “I said if you hear of anything just a little cheaper let me know. Within a week he emails me a photo of a house for $100. I thought that’s just crazy. Why not? It’s a way to cut our expenses way down and kind of open up a lot of time for creative projects because we’re not working to pay the rent.”

Houses on sale for a few dollars are something of an urban legend in the US on the back of the mortgage crisis that drove millions of people from their homes. But in Detroit it is no myth.

One in five houses now stand empty in the city that launched the automobile age, forged America’s middle-class and blessed the world with Motown.

Detroit has been in decline for decades; its falling population is now well below a million – half of its 1950 peak. But the recent mortgage crisis and the fall of the big car makers into bankruptcy has pushed the town into a realm unique among big cities in America.

A third of the population are unemployed. Property prices have fallen 80% or more in large parts of Detroit over the last three years. The average price of a home sold in the city last year has been put at $7,500 (£4,900).

The recent financial crash forced wholesale foreclosures among people unable to pay their mortgages or who walked away from houses that fell to a fraction of the value of the loans they had taken out on them.

Banks are selling off properties in the worst neighbourhoods, which are usually surrounded by empty and wrecked housing, for a few dollars each. But even better houses can be had at a fraction of their former value.

Technically, Brumit paid $95 for the land and $5 for the house on Lawley Street – which fitted what estate agents euphemistically call an opportunity.

Brumit said: “It had a big hole in the roof from the fire department putting out the last of two arson attempts. Both previous owners tried to set it on fire to get out of the mortgages. So there’s a big hole about 24ft long and the plumbing had almost entirely been ripped out and most of the electrics too. It was basically a smoke damaged, structurally intact shell with a snowdrift in the attic.”

Setting fire to houses to claim the insurance and kill off the mortgage is not uncommon in Detroit; a blackened, wooden corpse of a house sits at the bottom of Brumit’s street. But it is more common for owners to just walk away from their homes and mortgages.

On the opposite side of Lawley Street Jim Feltner and his workers were clearing out a property seized by a bank. “I used to be a building contractor. I was buying up places and doing them up. Now I empty out foreclosures. I do one or two of these a day all over the city,” he said. “I’ve been in Detroit 40 years and I’ve watched the peak up to $100,000 for houses that right now aren’t worth more than $20,000 tops. I own a bunch of properties. I have 10 rentals and I can’t get nothing for them, and they’re beautiful homes.”

Feltner’s workers are dragging clothes, boots and furniture out of the bedrooms and living room, and dumping them in the front yard until a skip arrives. Kicked to one side is a box of 1970s Motown records. A teddy bear lies spreadeagled on the floor.

“You could get about five grand for this place,” said Feltner. “Nice house once you clean it out. All the plumbing and electricals are in it. Roof don’t leak.”

Brumit said a man called Jesse lived there. “Jesse had mentioned that he was probably going to get out of there because he knew he could buy a place for so much less than he owed. That’s a drag. You don’t want to see people leaving,” he said.

The house next door is abandoned. On the next street, one third of the properties are boarded up.

It’s a story replicated across Detroit.

Joan Wilson, an estate agent in the north-west of the city, whose firm is offering a three-bedroom house on Albany street for $1, says that more than half of the houses she sells are foreclosures in the tens of thousands of dollars. “The vast majority of people that call to enquire, almost the first thing out of their mouth is that they want to buy a foreclosure. I have had telephone calls from people looking online that live, for example, in England or California, who’ve never set foot in the area. They’re calling about one specific house they see online. I tell them they need to look at the neighbourhood. Is it the only house standing within a mile?”

But what is blight to some is proving an opportunity to remake parts of the city for others living there. The Old Redford part of Detroit has suffered its share of desolation. The police station, high school and community centre are closed. Yet the area is being revitalised, led by John George, a resident who began by boarding up an abandoned house used by drug dealers 21 years ago and who now heads the community group Blight Busters. They are pulling down housing that cannot be saved and creating community gardens with fresh vegetables free for anyone to pick.

“There’s longstanding nuisance houses, been around seven, eight, nine years. We will go in without a permit and demolish them without permission,” said George. “If you, as an owner, are going to leave something like that to fester in my neighbourhood, obviously you either don’t care or aren’t in a position to take responsibility for your property, so we’re going to take care of it for you.” Blight Busters has torn down more than 200 houses, including recently an entire block of abandoned housing in Old Redford. “We need to right-size this community, which means removing whole blocks, and building farms, larger gardens, putting in windmills. We want to downsize – right-size – Detroit,” George said.

Houses that can be rescued are done up with grants from foundations.

“Detroit has some of the nicest housing stock in the country. Brick, marble, hardwood floors, leaded glass. These houses were built for kings,” George added. “We gave a $90,000 house to a lady who was living in a car. She had four children. It didn’t cost her a dime. We had over a thousand people apply for it. It’s probably worth $35,000 now.”

Old Redford is seeing piecemeal renewal. One abandoned block of shops has been converted to an arts centre and music venue with cafes. One of the few remaining cinemas in Detroit – and one that’s among the last in the US with an original pipe organ – has been revived and is showing Breakfast at Tiffany’s.

Brumit calculates that he has spent $1,500 to buy and do up his house, principally by scavenging demolition sites. He will move in with his wife and four-month-old child once it is complete, probably in the summer.

He said: “The Americans we know got ripped off by the American dream. But [the renovation] is the most like moving out of the country that we can actually do. We’re the minority in terms of ethnicity and this is a rich environment … there’s 30% open space in the city and that doesn’t include the buildings that should be torn down. You’re in a city riding your bike around and you hear birds and stuff. It’s incredible.”

US Housing Enters 2021 In A Massive Bubble

Taxpayers On The Hook For Nearly Half Of Apartment Building Mortgages