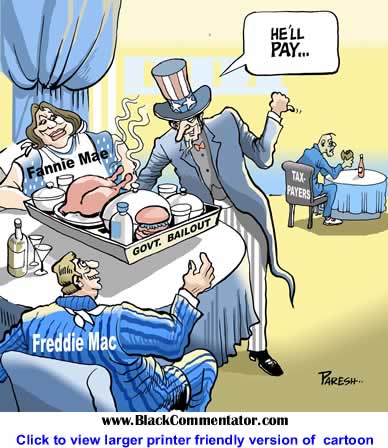 The public role of Fannie Mae and Freddie Mac, as well as the U.S. government’s implied backing of the companies’ $1.7 trillion in debt, should be clarified by lawmakers to remove ambiguity, Frank told reporters after speaking to a conference of black, Hispanic and Asian Realtors in Washington today.

A “whole range” of options is being considered for investors in the two government-seized companies, “from paying nothing to a haircut to whatever,” said Frank, whose committee oversees Fannie Mae and Freddie Mac. Frank’s comments pushed the spread on Fannie Mae’s two-year debt wider and prompted a reply from the U.S. Treasury Department, which reiterated its financial support for the companies.