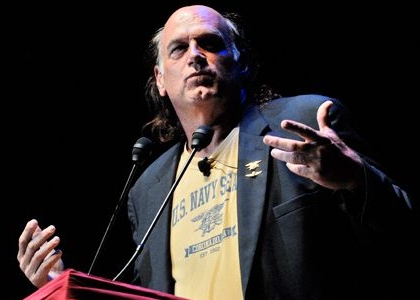 With his concern about the erosion of freedom, one might think that Ventura has a lot in common with the Tea Parties but he sees a conspiracy behind the movement because they only began protesting after Barack Obama became president.

"Where were those guys protesting when we lost habeas corpus, when they violate the Fourth Amendment of illegal search and seizure? They were nowhere to be found at that point in time," said Ventura.

But Ventura might agree with the protesters who are disgusted with the two-party system. "I just don't like the parties. I don't like -- don't get me wrong. It's not individuals. I despise the two parties. Despise them. They're ruining our country," he said.

The former governor went on to challenge Fox News' popular evening opinion personalities to interview him. Ventura claimed that Glenn Beck, Bill O'Reilly and Sean Hannity declined to let him promote his new book on their shows.

"How come the Three Stooges on later at night won't have me on?" he asked. "That's what I call them. Larry, Moe and Curly."

This video is from Fox News' Fox and Friends, broadcast March 9, 2010.

1 Comments in Response to Ventura: ‘I despise the two parties’

That's a good start, but I know you can add more.

CONSPIRACY TO CONFIRMATION - Social Distancing For Collecting Our Electromagnetic Imprints